These sculptures were a topical take on the mythology of manhood, and the mad passion that enveloped New Zealand when we hosted the Rugby Wolrd Cup.

The sculpture series Forms 1 & 2 (with more to come) was a take both affectionate and irreverent, on an unhealthy national obsession.

Form 1 was displayed at the Kaipara Coast Sculpture Gardens near Kaukapakapa, and Form 2 was on show first at The Sculpture Park at Waitakaruru, at then at the Waikato Museum’s Rugby World Cup exhibition, where it graced the main street of Hamilton.

Based on a familiar form within the vernacular of our material culture, the sculptures add a further dimension of social and environmental commentary. Only thing is, they are vastly scaled up (and seriously heavy), to the point we humans are Hobbit-sized, relatively. Many late-night drunken revellers on Hamilton's main drag tried to push the Waikato version, Form 2, but couldn't.

"Stone’s playful aesthetic has another aspect to it, with the scrum machine form meshing with symbols of NZ ‘s rural landscape, and our perceived economic cash cows.

"The result is a real-world sculpture, not afraid of being handled – in fact Forms 1 & 2 positively invite audience interaction. Come try pushing me, they challenge the viewer.

"Arts patrons at the opening of the Kaipara exhibition were seen to respond to the whero, and get downright physical. They had no show of moving Form 1, a Herculean task for ordinary humans as it is actually twice the size and many times the weight of the usual scrum machine.

"This is Stone’s way of pointing to our national heritage of imposing giant status on our sports heroes, and of elevating them to superhuman expectations. 'And we all know where that can lead,' says the artist 'so you could say these monumental works are also all about human folly and frailty.'"

Darryl Pike, Manager Collections at the Waikato Museum Te Whare Taonga o Waikato said of the sculpture “The arrival of Form 2 was perfectly timed to coincide with the launch of our rugby exhibition Red, Yellow (All) Black – A Local Look at our National Game. The work will be enjoyed by our many visitors to the city for the Rugby World Cup and will give them much to consider”.

The pieces may differ subtly one from another, but the essential form remains constant. The sled that forgoes the development of the axle and the wheel. The great padded shoulders, defiantly, boldly, blindly staring back at the curious world. They are extra spooky in the moonlight.

They speak redolently of mystery, of inexplicable usage – they hint at medieval torture instruments, road-building from the eons before roads, or siege machines. They sit silently at the corners of so many paddocks, and are the enduring take-home mystery for the observant cultural tourist to these isles. 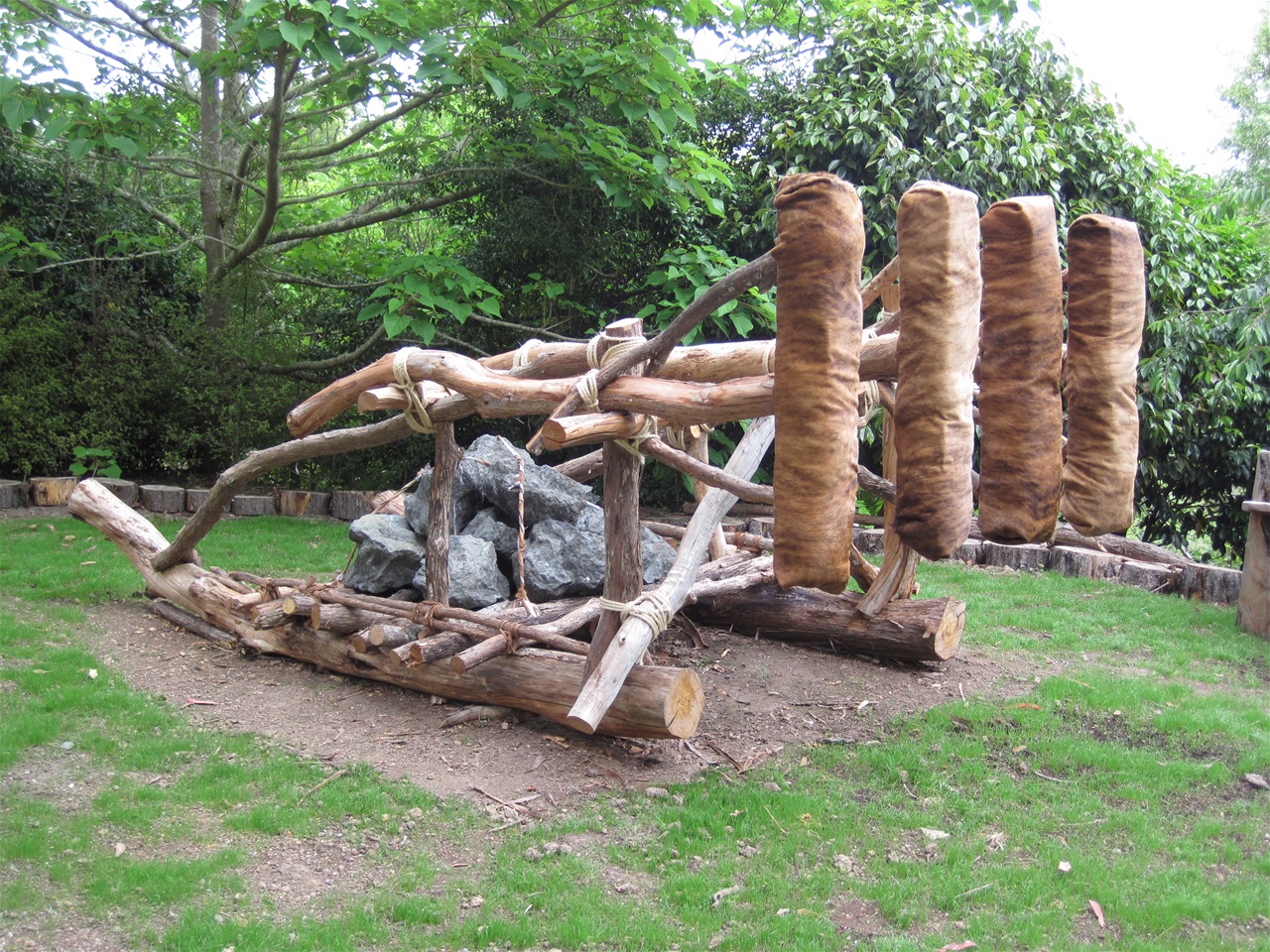 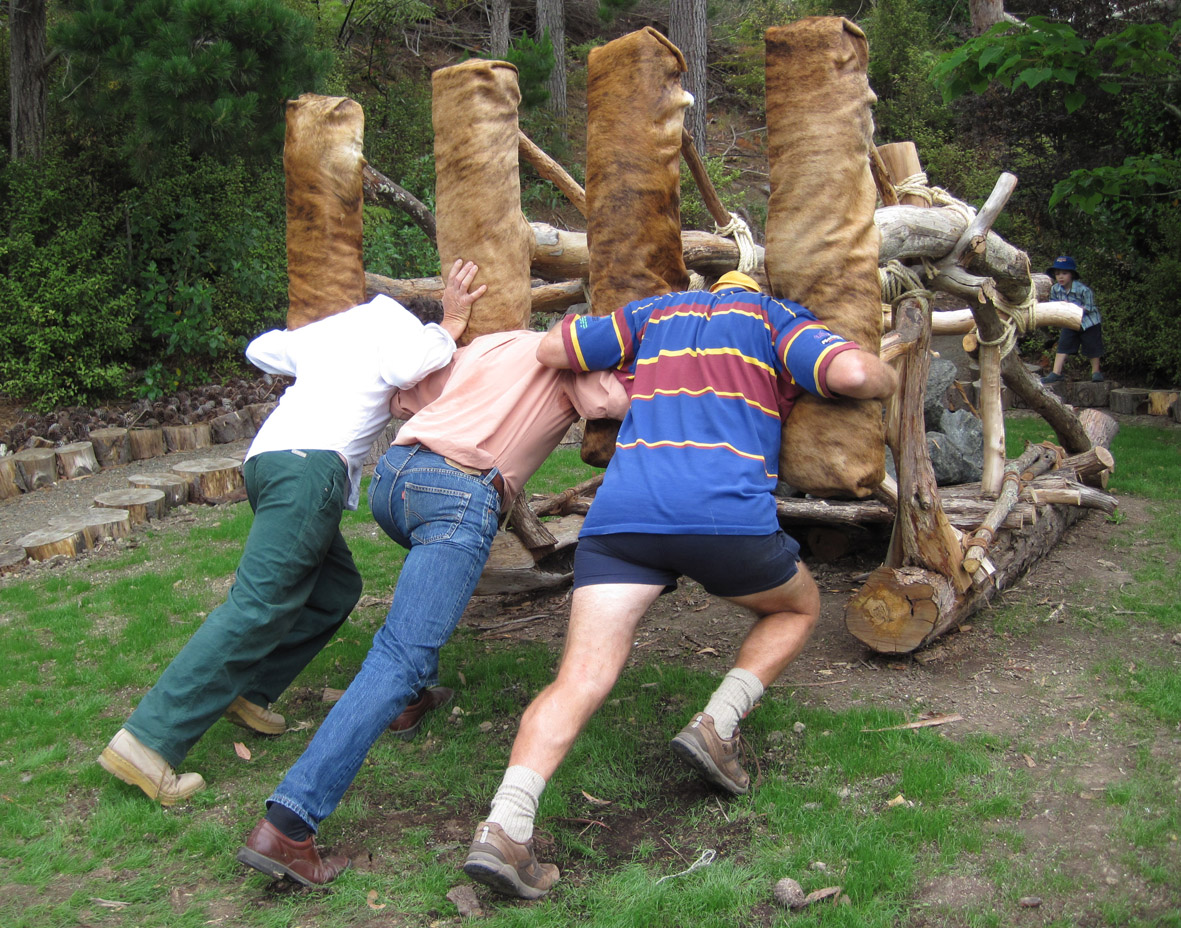 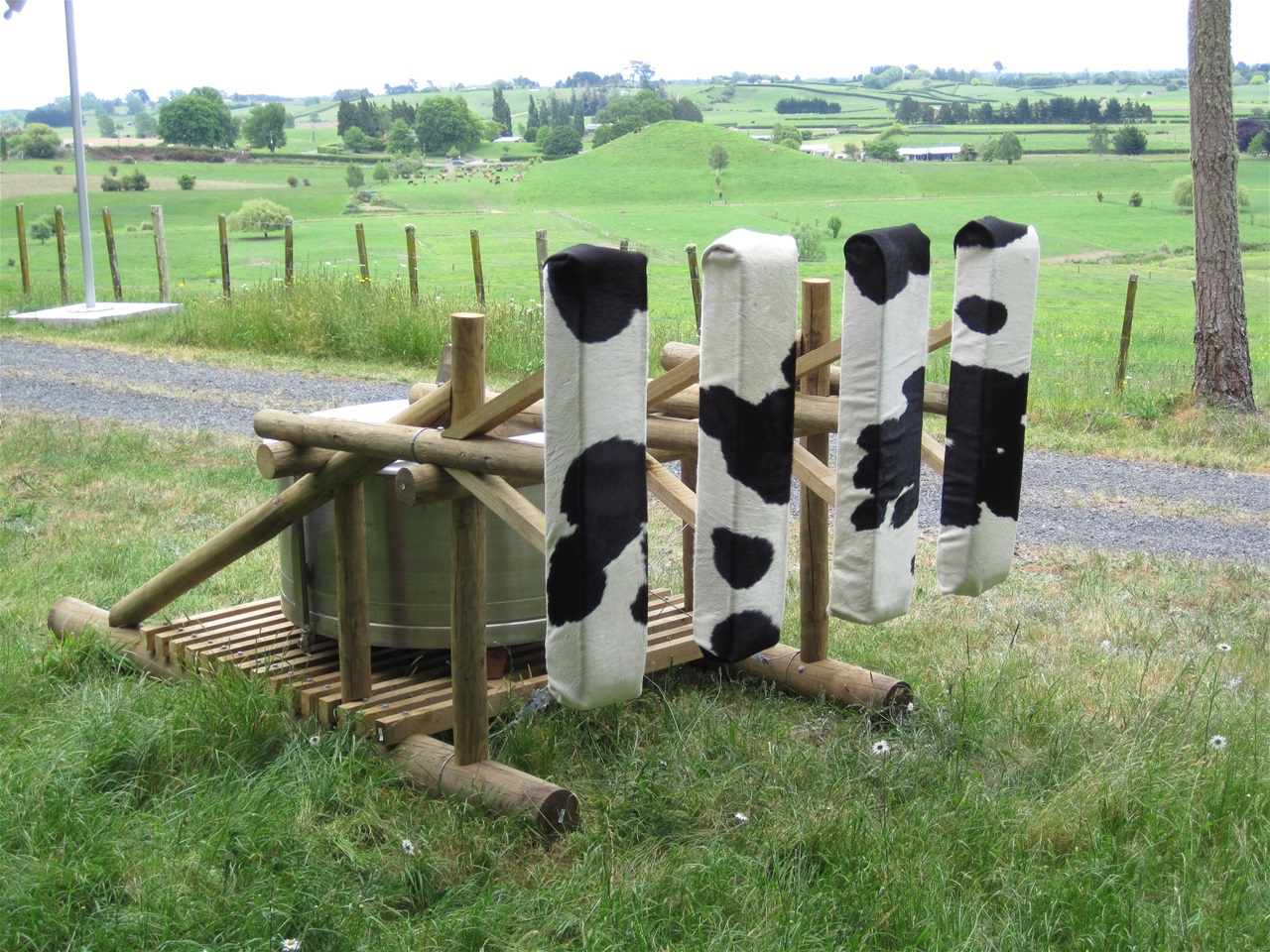 Form 2, in a suitable Waikato setting at The Sculpture Park Waitakaruru. 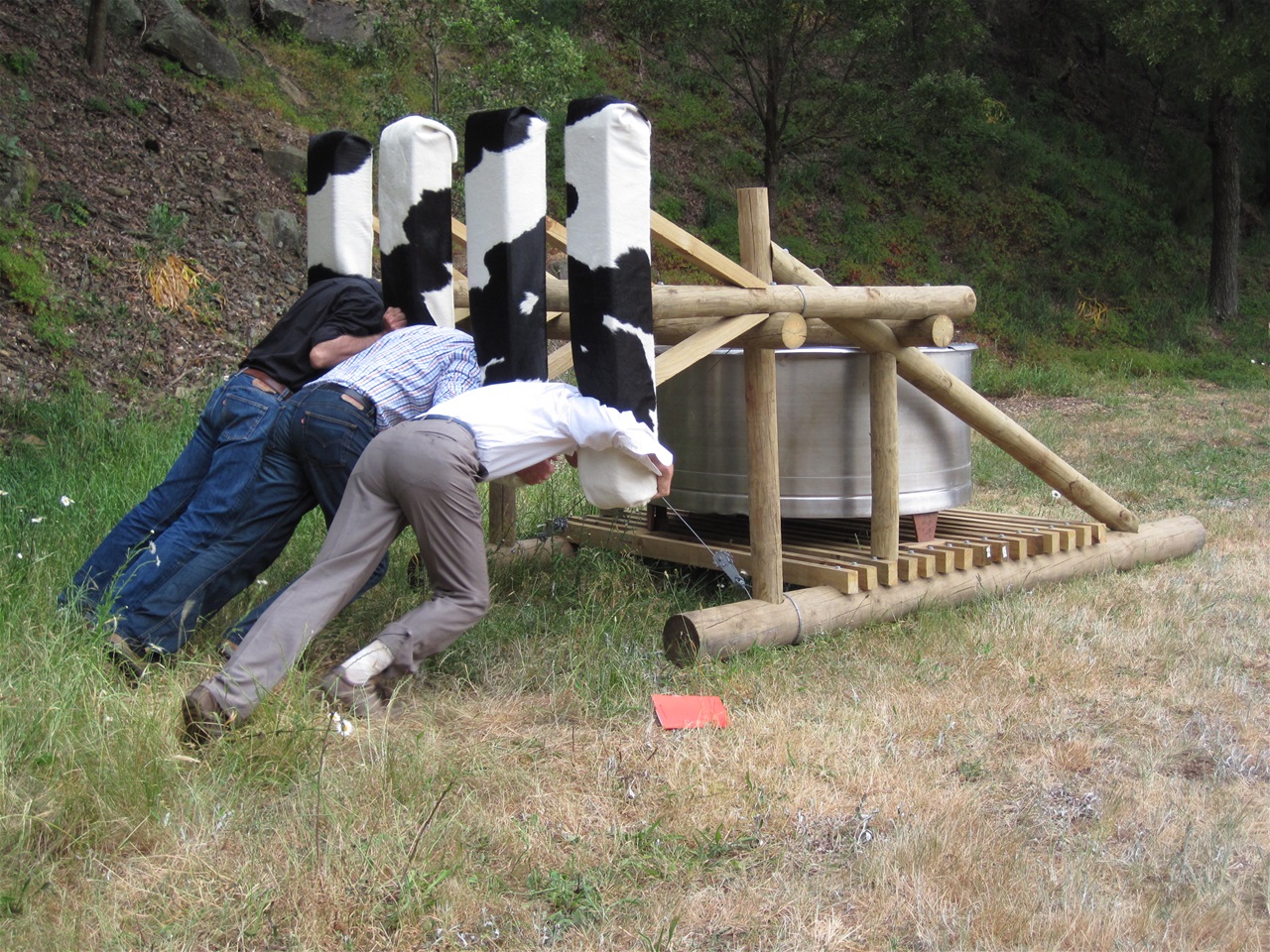 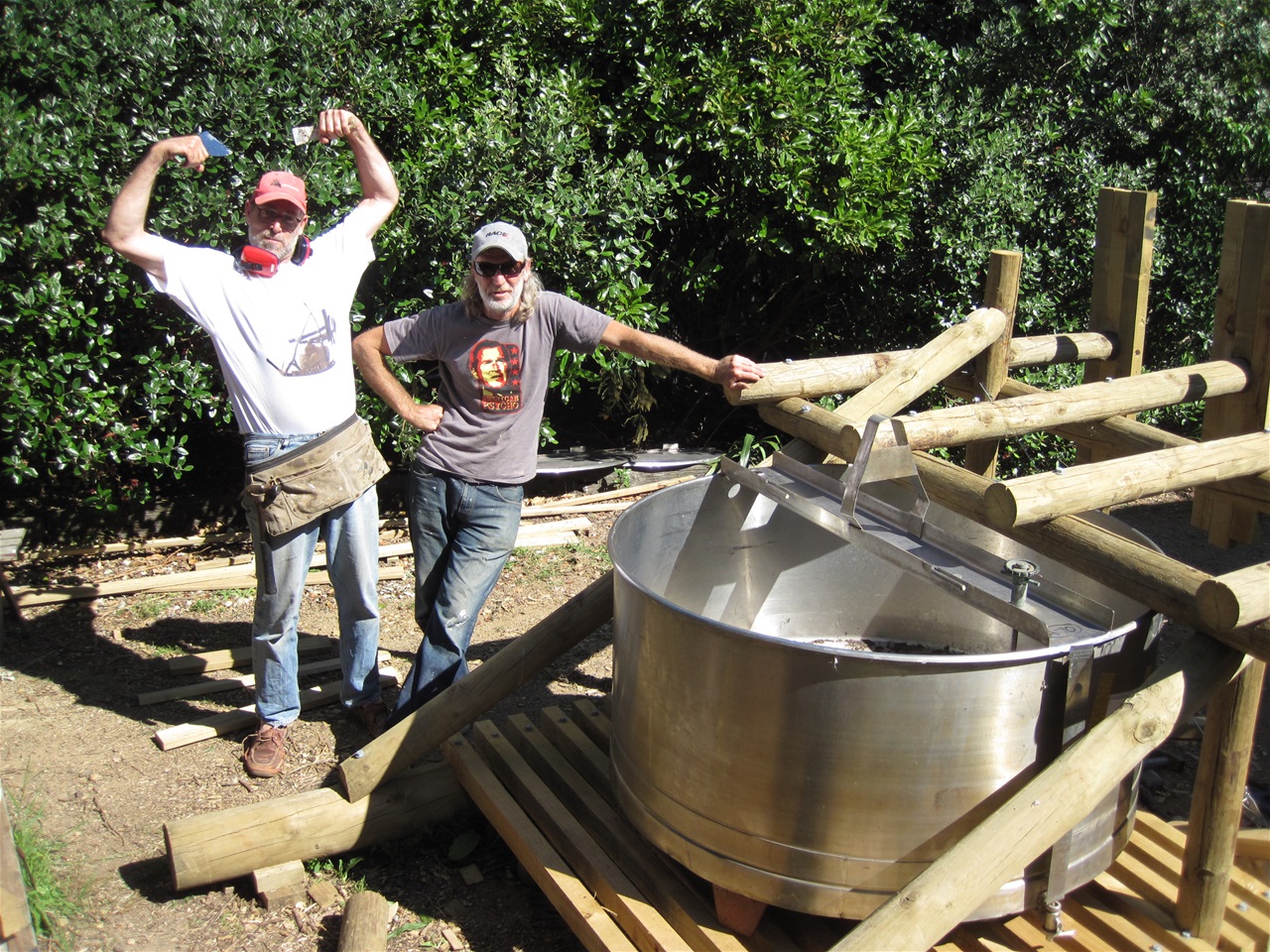 The build of Form 2: Alex Stone and Paul Rhind. 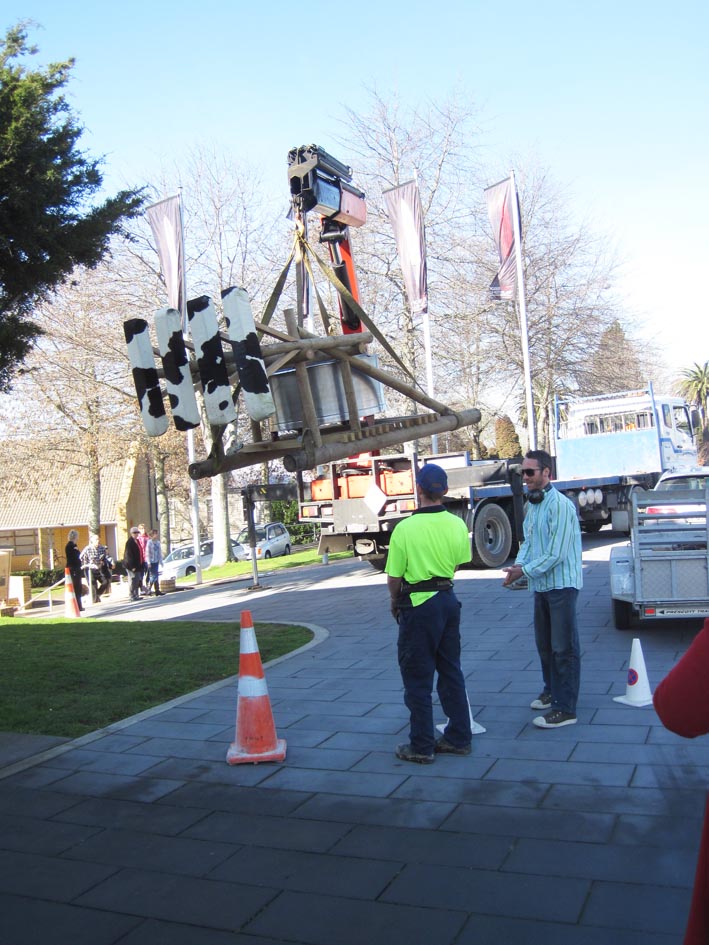 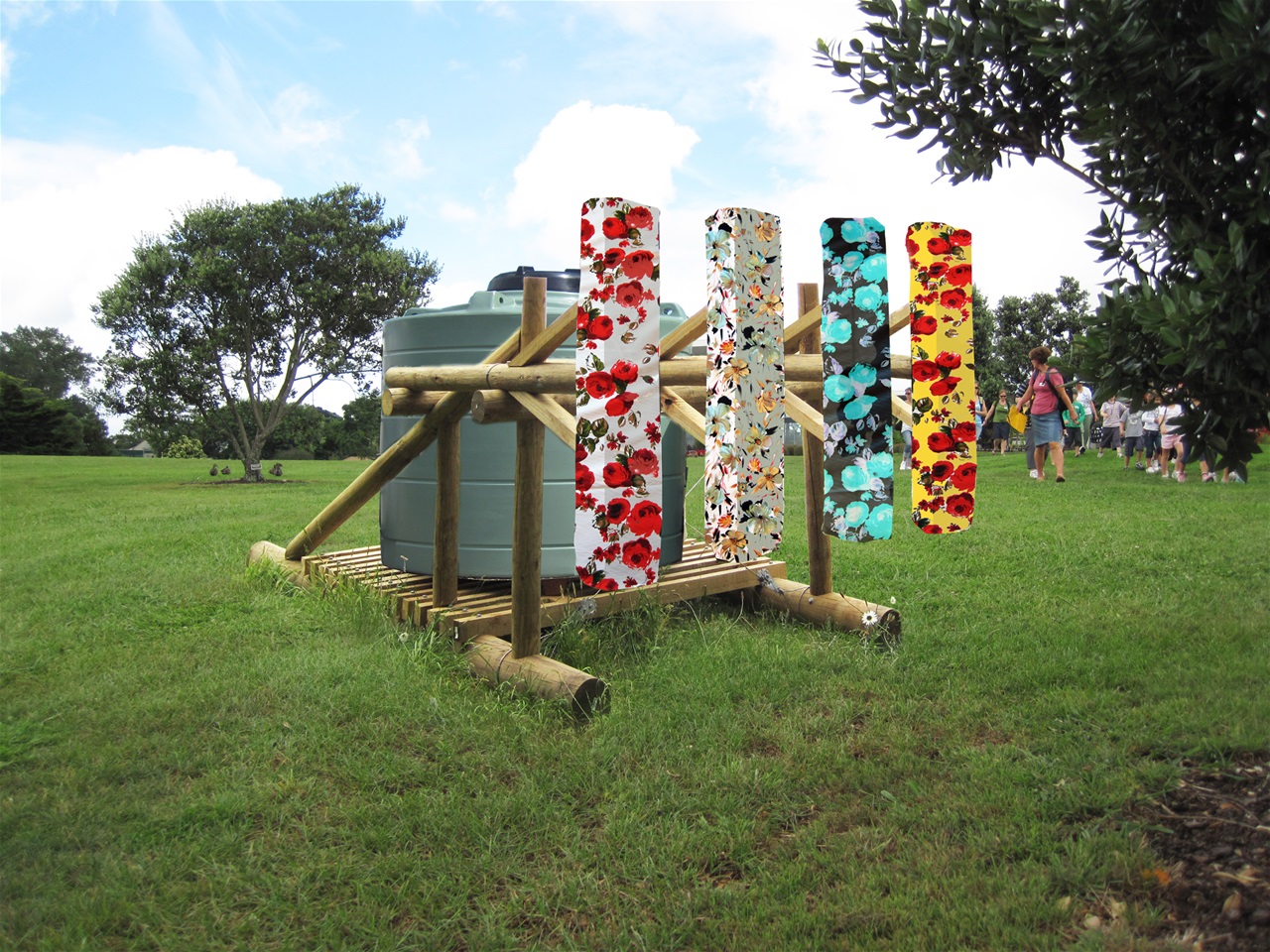 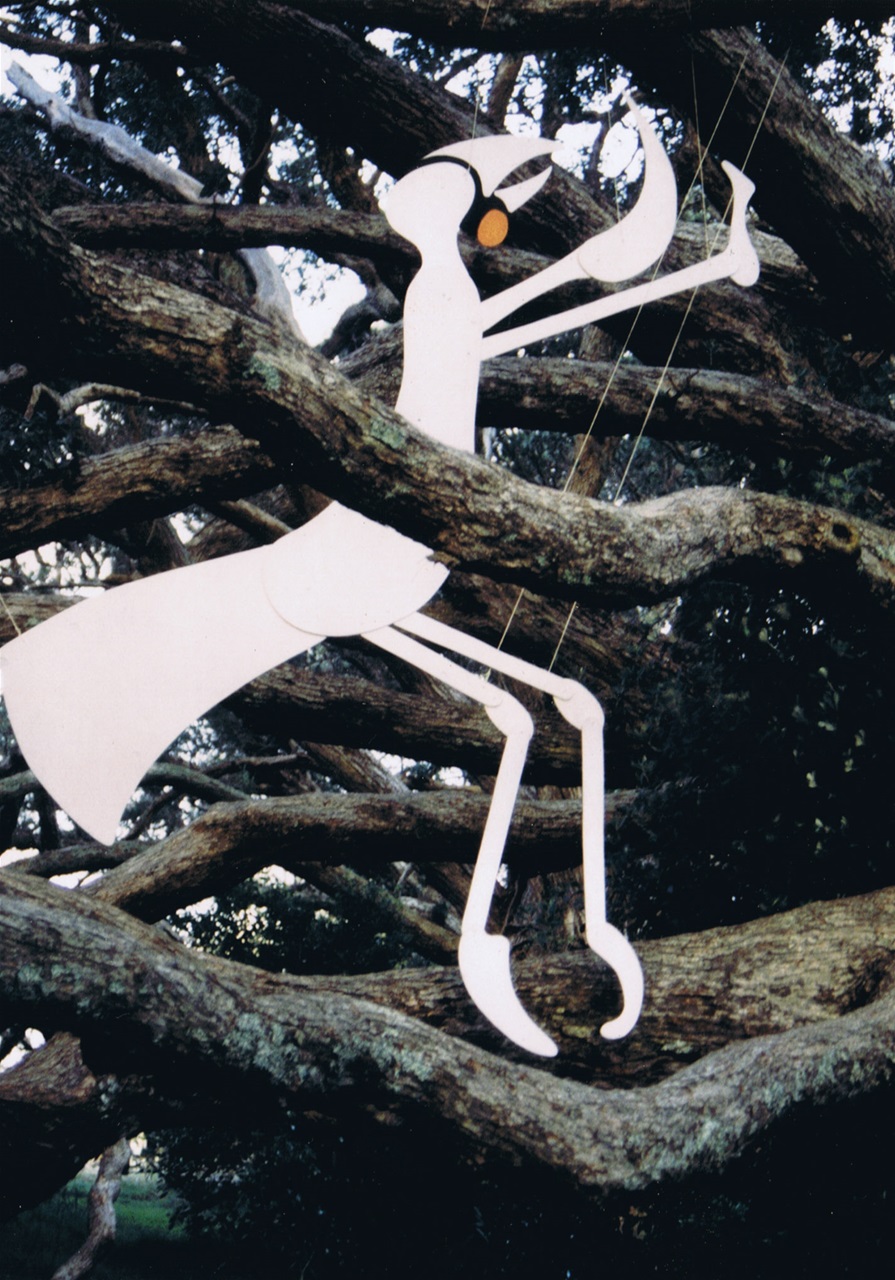 This puppet, hung in 'The Magic Tree,' a giant old pōhutukawa on Waiheke Island, is attended to by the poem:

The sky
I saw it once,
fulsome as a flag -

freckle-faced, it was
with clouds making
magic mushroom rings

and laughing,
and sailing,
gaily
against the wind.

“The sky
it stays the same,
of course,”
said my un-con-cer-ned friend,
“We’ve just discovered that it can.”

While all around us
wings were beating,
making lines of sound -
soft, yet insistent
as old memories

laid down for us
on colour plates
in the libraries of the world.