Comments on the paintings by Sharonagh Montrose, PhD. 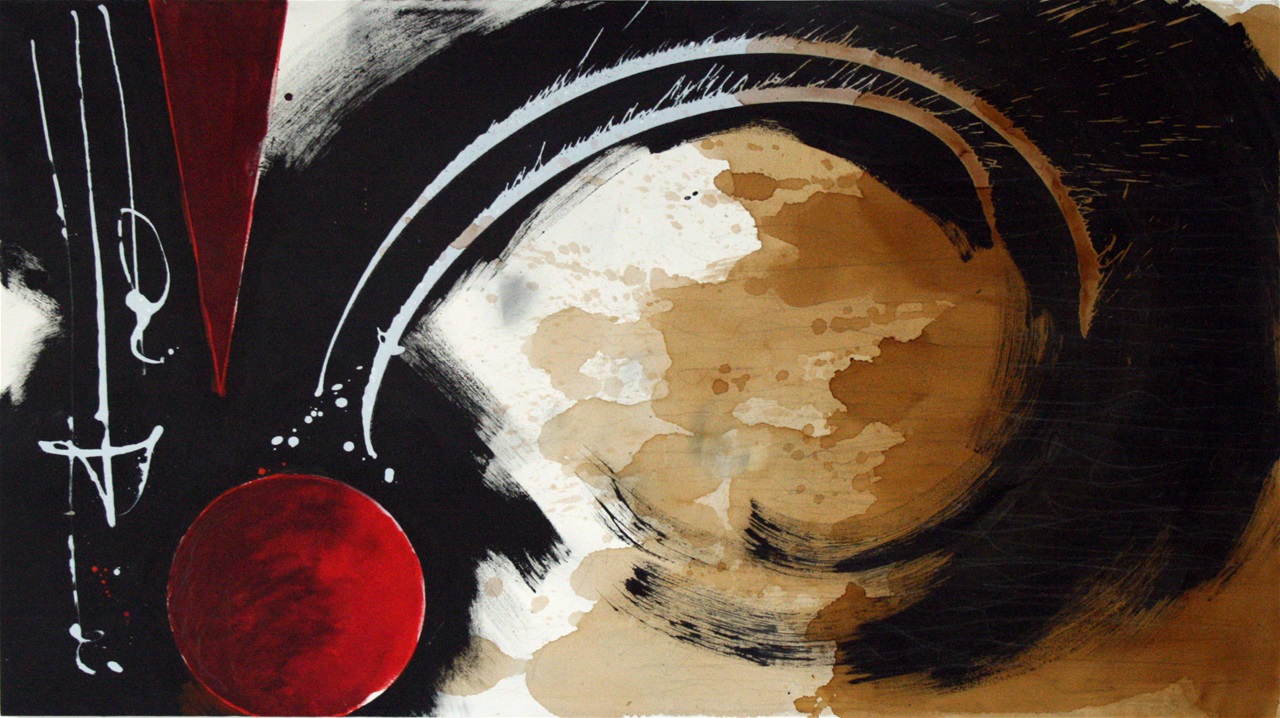 2003 Acrylic and shellac on canvas

This is another work in the series inspired by exclamation marks. Here, Alex moves from a tightly controlled, conceptual investigation to an expansive, dramatic gestural work of passion.

The off-set exclamation mark is the premise of the painting. It takes the exclamation mark to new heights of play in brush strokes that invoke vectors and vortexes into forcefields of expression.

Crackling energy courses through this painting in joy and discovery, calling to worlds within words, in the sheer delight of painterly exclamation. We, the viewer, drop into this vortex of exhilaration and are flung out and around, absorbed, and return offset in wonder. 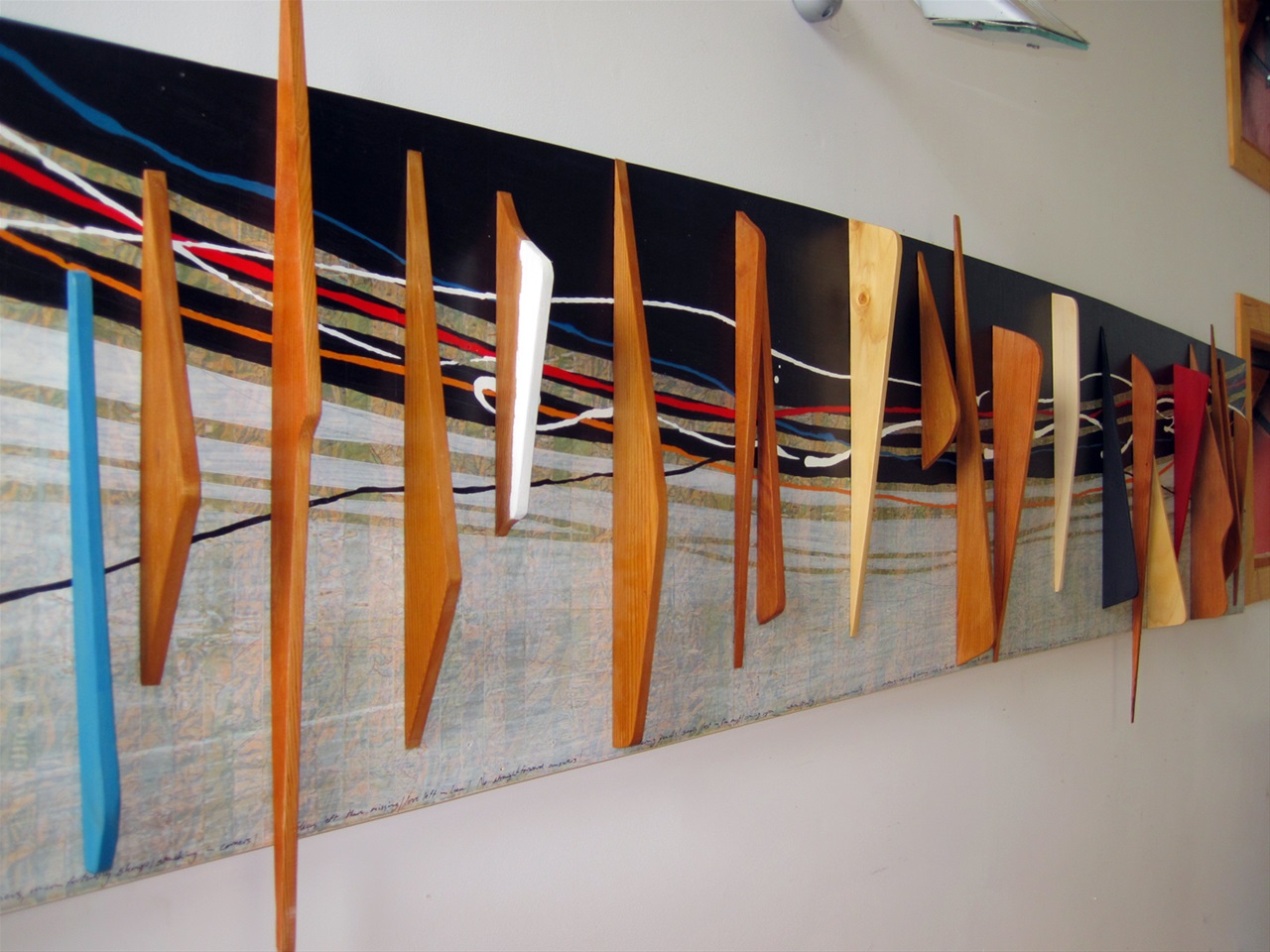 A complex work with an overall harmony and balance that stimulates viewing perspectives and invites intrigue! This long work has a delicate upper and lower curve in the frame that speaks to segments of longitude.

It is made in part from a collage of 1:50 maps of mountains, laid side by side in equal measure. Painted lines of mapping significance add texture and cohesion to the work e.g. railway lines are black, secondary road lines are blue etc. The white lines act as a binding device to bundle the other painted lines together.

3D elements add architectural space to intimate the form of hills. It is a work that had a slow genesis, evolving with consideration to this present place of comfortable disjunction.

The eye must travel over sharp corners to see in part, each duration irregular and locatable only within limited context. The work plays with the linear format of maps and repositions them into a performance piece that marries pictorial plane with the language of sculptural space.

A poem attends to this work:

No straightforward answers
wandering pencils
souls lost in the mist
coming upon
intermittently,
occasionally,
contours
crossing and cursing
lines in the rain
fault lines and plates
rising again,
and volcanoes saying “Truth lies
within
the drawing of it.”

Ardent Hearted or The Surprise-ability of Love

2010, acrylic and pencil on canvas

This is a work of visual surprise and boundless energy expressed in exclamation marks that dance across a musical palette. These bold marks are vibrant atop the flat, matte blacks, the steely greys and empty whites.

Surface tension is formed by the sense of their moving line and by the crackling energy of their textural execution. The painterly rhythms are visually percussive and lay down a sonic notation akin to open ended jazz, not quite finished and bursting with the power of infinite conjunctions. 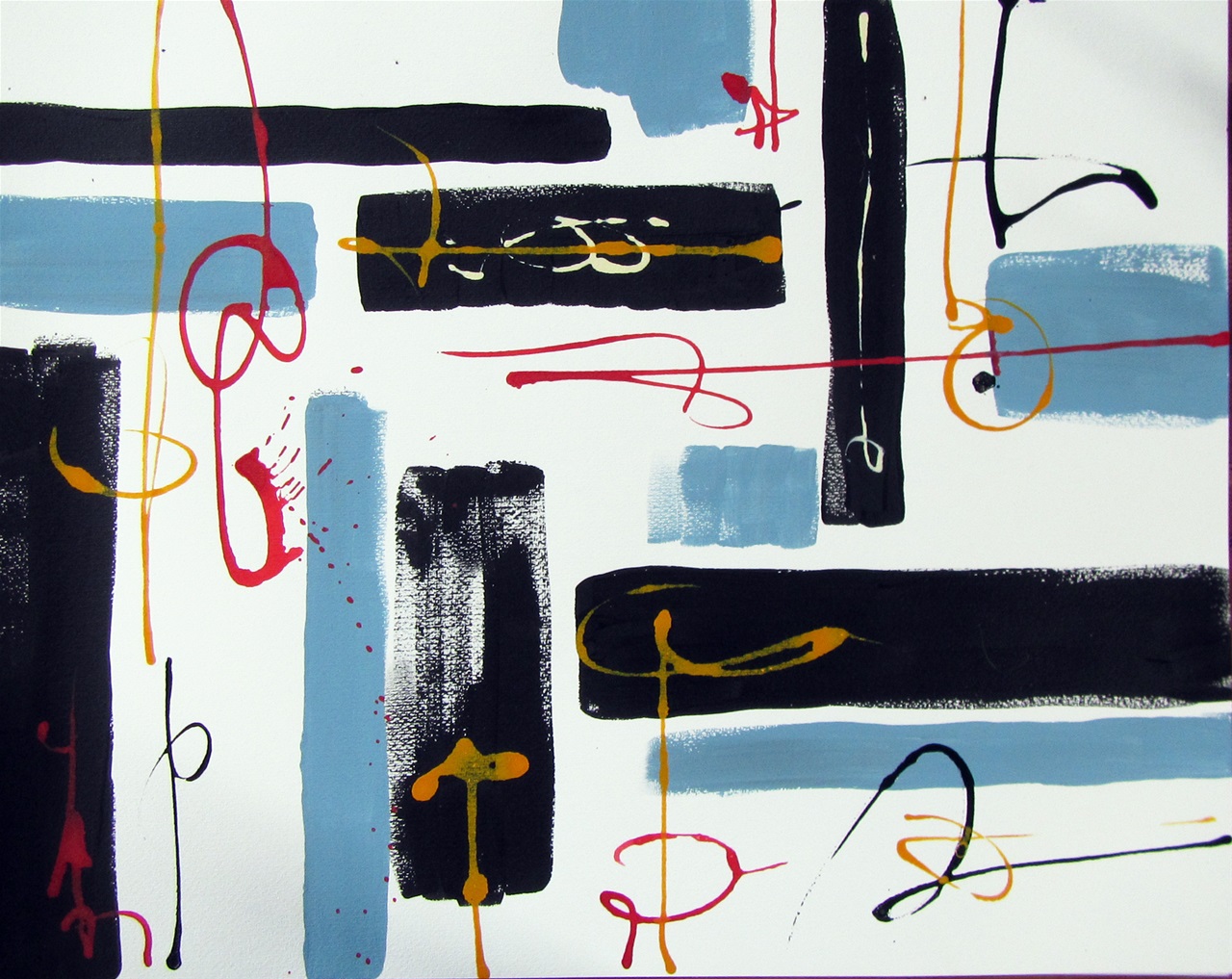 This mesmerising work is of sheer delight to both viewer and to the artist. Inspired by a poem written by Alex in Perth, Western Australia, the painting captures a joyous breeze, carried from the outback, as music in notation across a page. It celebrates the mystic of other places and other worlds: secrets, stories, unknown scents of otherness!

Structurally, the background breaks up the picture frame with grey and black shapes, like jetties, which work, in painterly direction, from the outside inward. Overlapping in places, these shapes each have their own balance and intensity. They act as a stage; their internal, coherent language supports harmoniously the wild and fluid interplay of the textured swirls that sweep with colour, energy and curiosity across the surface of this deliberate background.

It is a masterful work where formal construction conjoined with lyrical line moves sense and meaning into poetic permutations beyond the logic of language. 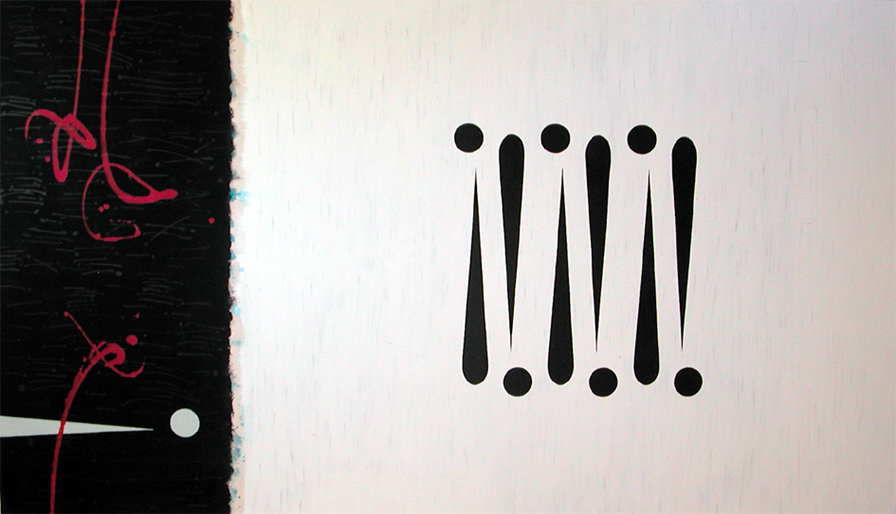 The History of Anchors; the Poetics of Departure

To the left, red gestural marks on matte black act as an organic foil and prelude to prepare the eye. The white, horizontal exclamation mark directs the narration. This opening, visual sequence reminds of night, sea voyages of heightened anticipation, where the eye strains for sense in the shards of moonlight.

Despite the narrative that one would like to impose, it is a story about marks. Thousands of exclamation marks ghost the surface. They form horizontal movement through the black ground and vertical movement through the white ground, in durational currents. Unpainted canvas intersects both movements and leaches a transition, from prelude, to the main event.

At first glance the predominant plane looks like a static composition of black on white. It is not!

As we visually move across these custom designed, exclamation marks we realise an animation in the mind. The dots are off centre. This offset effect disrupts our preconceptions and moves the marks to an expectant space between arrival and destination.

This is a tightly controlled and thoughtful work of interesting and endless complications.

A poem attends to this work.

The history of anchors; the poetry of departures

An island an its shadow
did dance
a line of thought;

The wind blew along,
along a longer time

re arranging
re appraising      and
re acquainting

them,
as fixes do, definitions of a journey.

And to you and I
they said

(the island and its shadow,
with the colour of midnight water whispering behind us)

“Between the point of arrival-and-departure
and the action of the sames,
there exists an exquisite poetry of expectation,

punctuated with charged space,
into which gestures, half-made and un-made
and occasionally complete,
settle silently like silt,
until the coast is clear again." 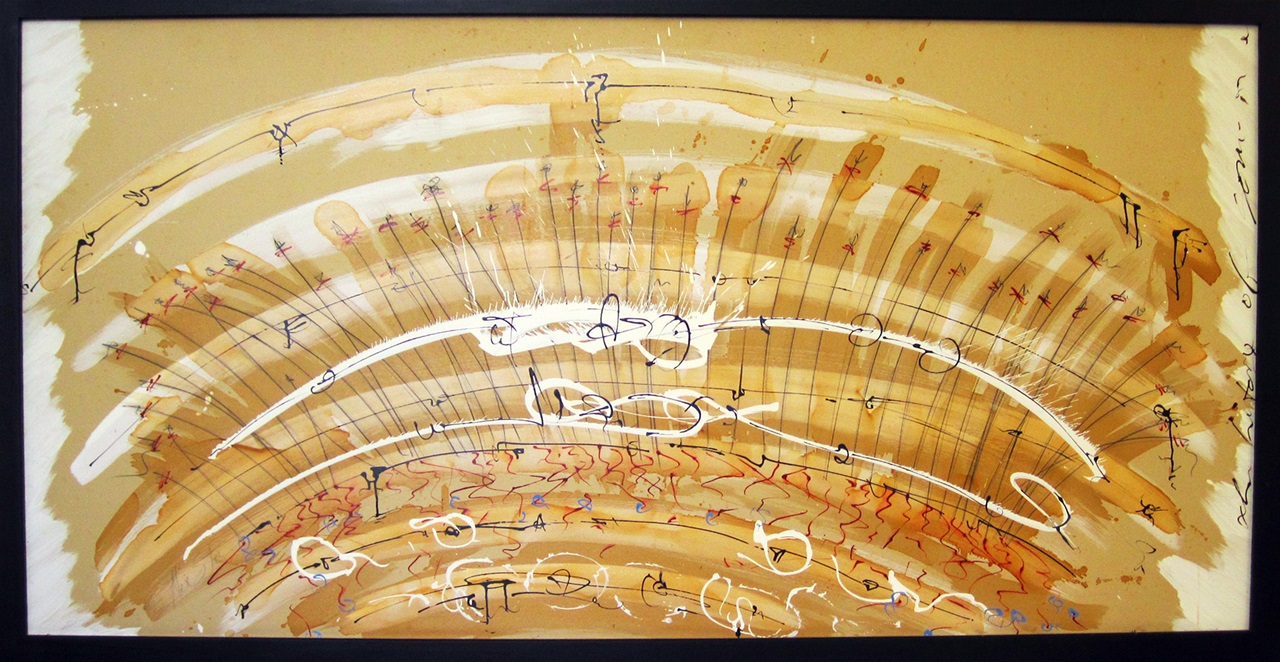 The History of Someone

2001 Acrylic, pencil and shellac on gib board

This large work is executed on a full sheet of Gib board, 2.4 by 1.2 metres. Most is left unpainted as natural Gib defined by a painterly wash of buff tone interspersed with white. It is a narrative infused with lightness and levity.

The composition is simple: an archway serves to host five layers of markings. Each layer is eventful, enthusiastic and exuberant. Movement from left to right, like a windscreen wiper, sets up a rhythm of the eye. The binding aspect of the painting is the mood of the marks: whilst each is different in form, there is a harmony of mood in their attitude that integrates the work.

We do not know who this someone is, whose life is expressed in these radiated layers. Mystery surrounds this part of the narrative. It could be anyone! It is most certainly someone with a definite and fortunate character.

This is a record of a large painting made in South Africa, using the only art materials available in a small platteland dorpie (a small, high country plains village).

This is a sparse painting. The landscape is stripped back to accentuate a simple, clean scape where a sonic narrative dominates. It is a modest counter to a complex title. Metaphorical lines dominate an empty sky. The song is gestural and exquisite in formal trills that spatter, controlled and deliberate, yet bursting in sound and silence where they texture the surface of the board.

The use of Gib board as surface s deliberate: it inspires prophetic thought of writings on the wall, accentuated by the clear notation of the skylarks’ song in stark relief.

Some artists place their mark on the land to invite a narrative with nature. This work however has power in transposing the memory of the experience of walking the High Country into metaphorical and lyrical marks across a visual stage to both capture and transcend location. Thus, the skylarks sing into new being! 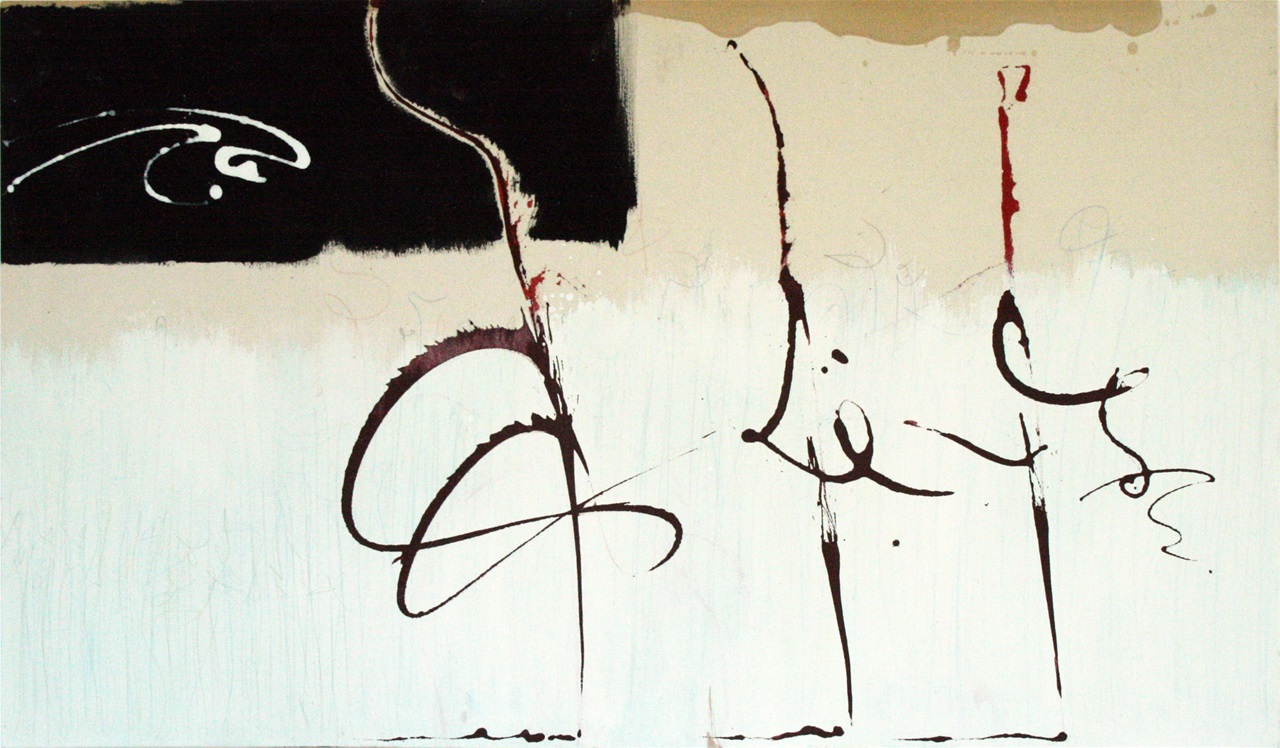 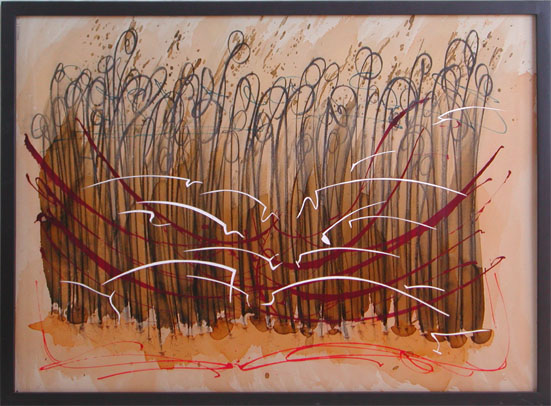 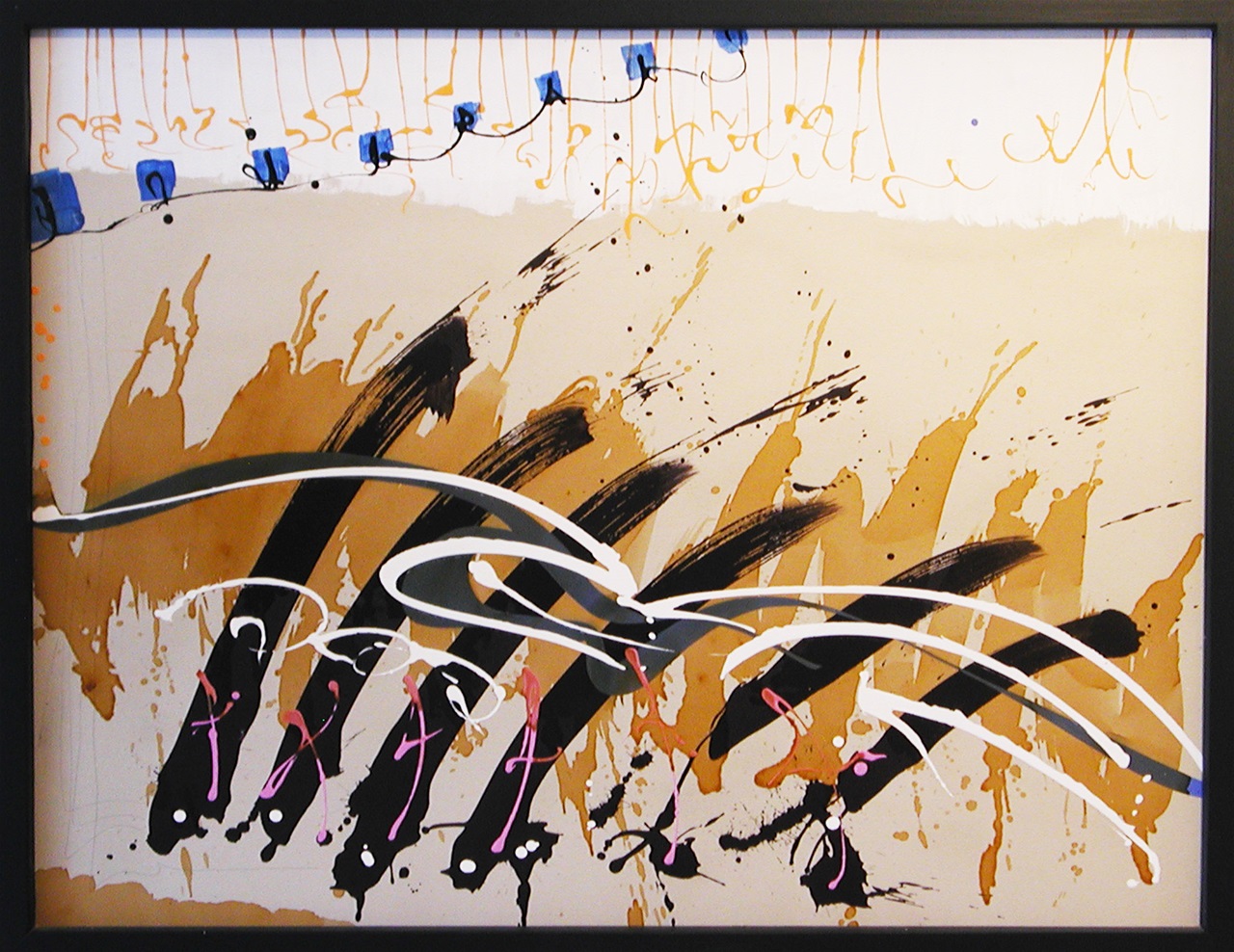 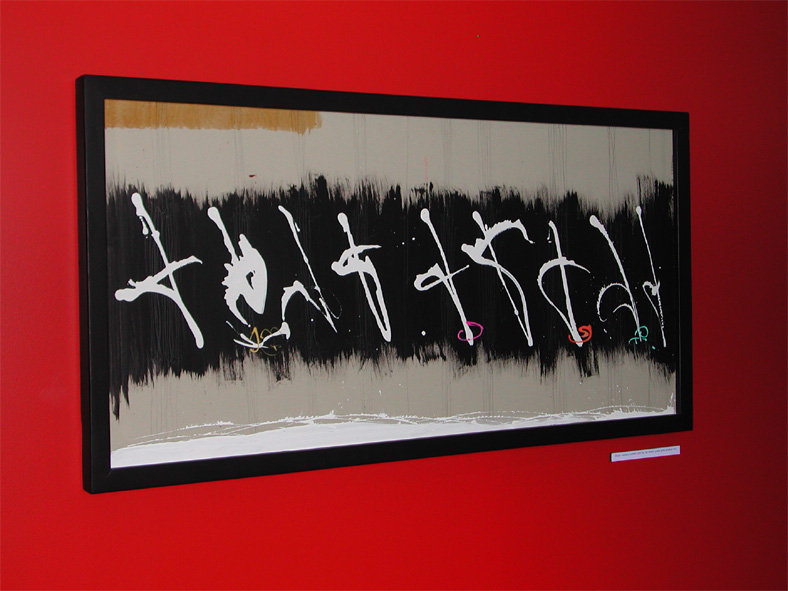 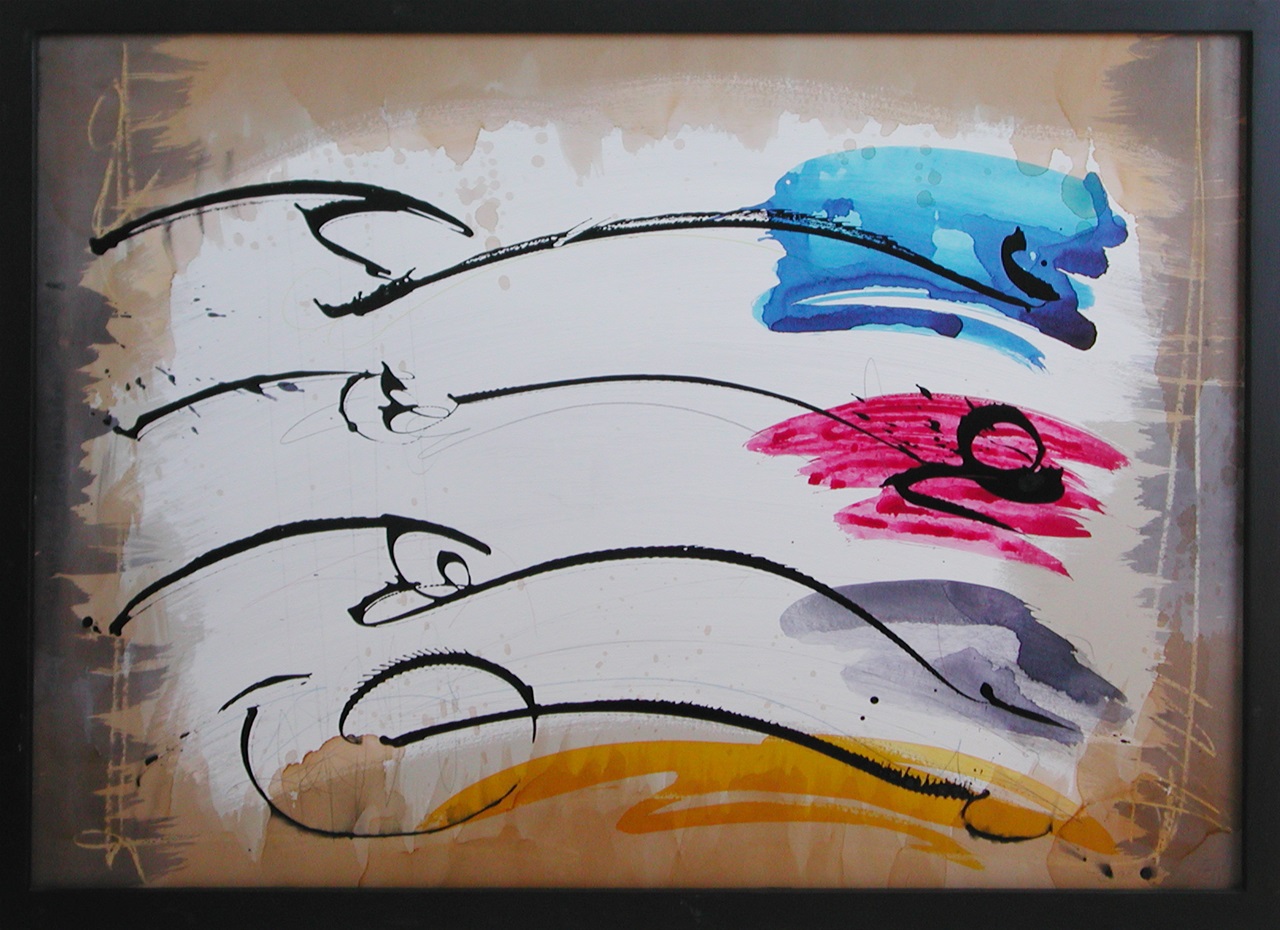 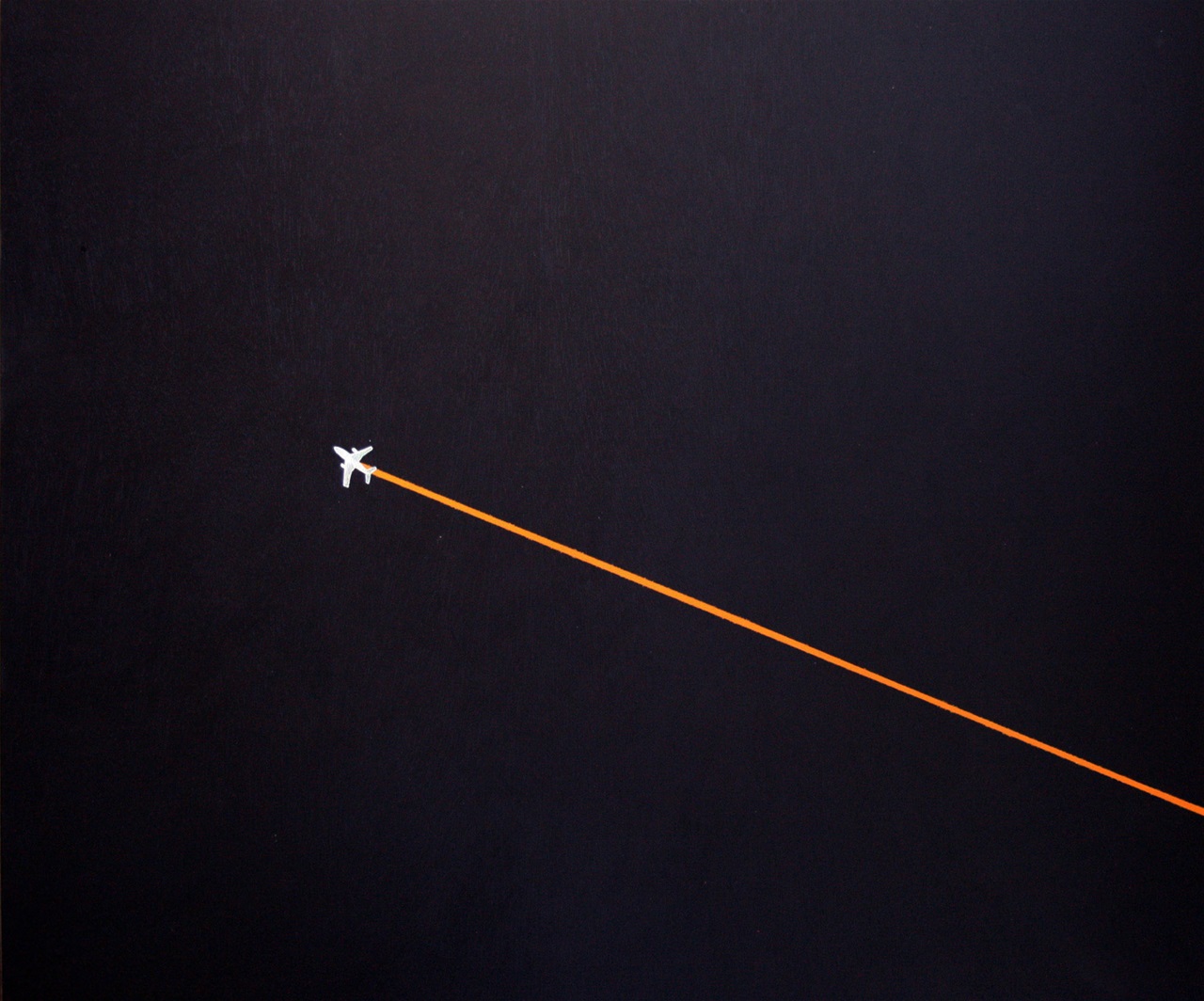 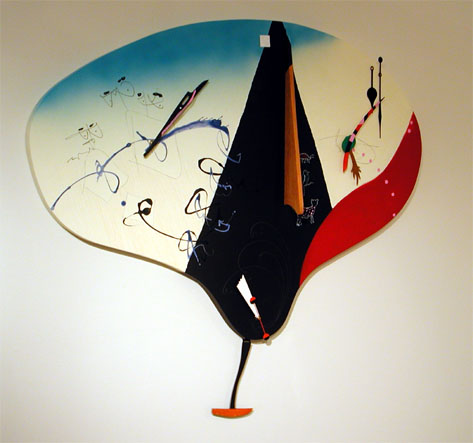 2014 Ink and acrylic on board, commissioned for marking the centenary of WW1.

This poignant work is in a very different style from those that make up the body of Alex’s conceptual practice. It has a mastery of line that emotes, and is appropriate for the purpose of marking the centenary of WW1.

The work responds to a newspaper image of volunteers marching down Queens Street on 10th Oct 1915, as they head off to an unknown war, some with accompanying children on this parade, some jaunty in their walk, most with no idea of consequences.

The subtle background of this work was made with brushstrokes using a white feather. It provides an uncertain textural surface. The soldiers march, stage right, faceless and monochrome: line provides definition and movement. They are anonymous, with only one direction which is off the frame.

The children are lively and have more movement and colour, in contrast: some are dancing alongside the volunteers or next to the marching feet.

The dispassionate narrative sets up an open conversation. It allows the mind to disengage with the reality of context.

A slight curvature of the frame adds to the sense of unreal and anchors the work in pictorial device.

The overriding sense of this work has context in the idea that where you place your feet has repercussions. 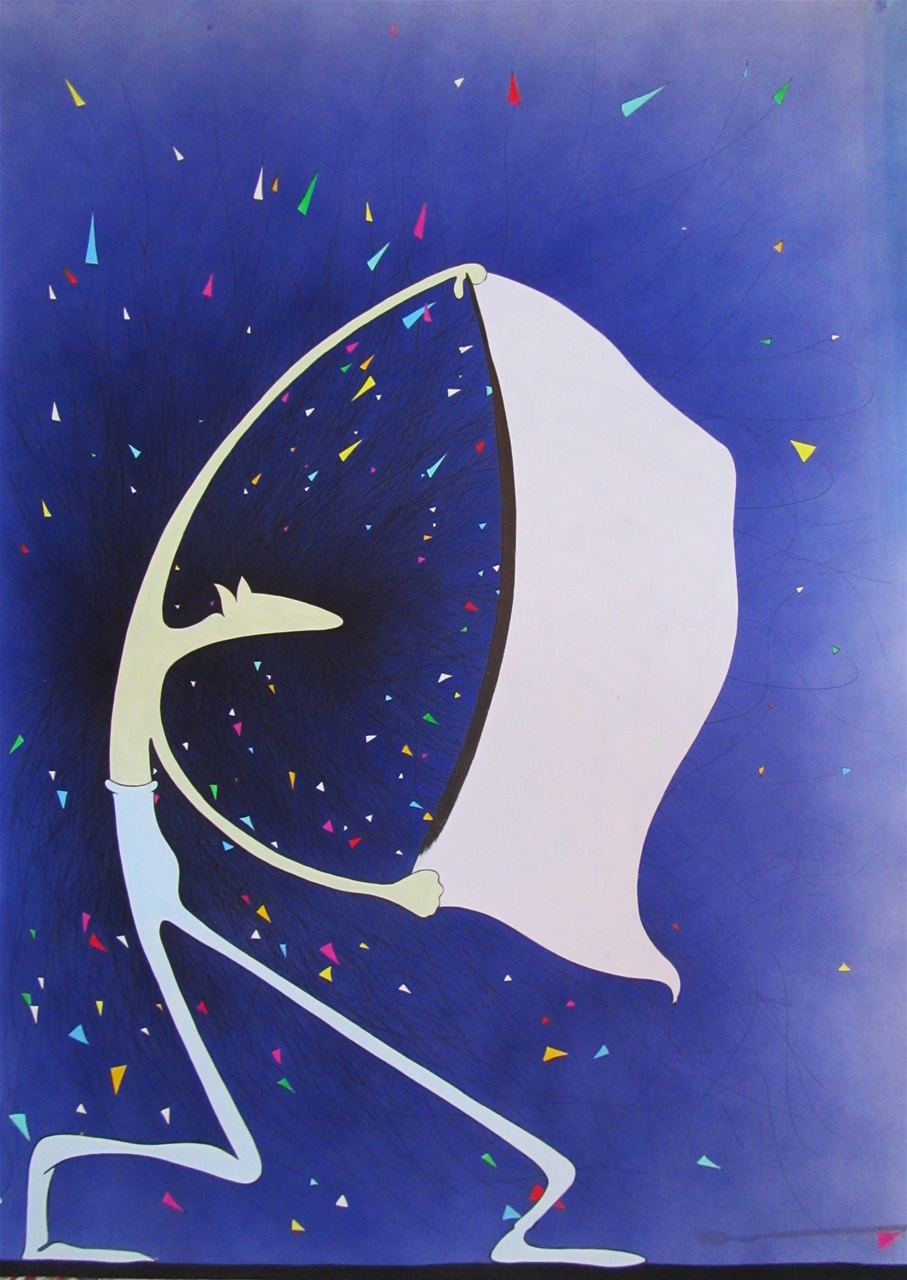 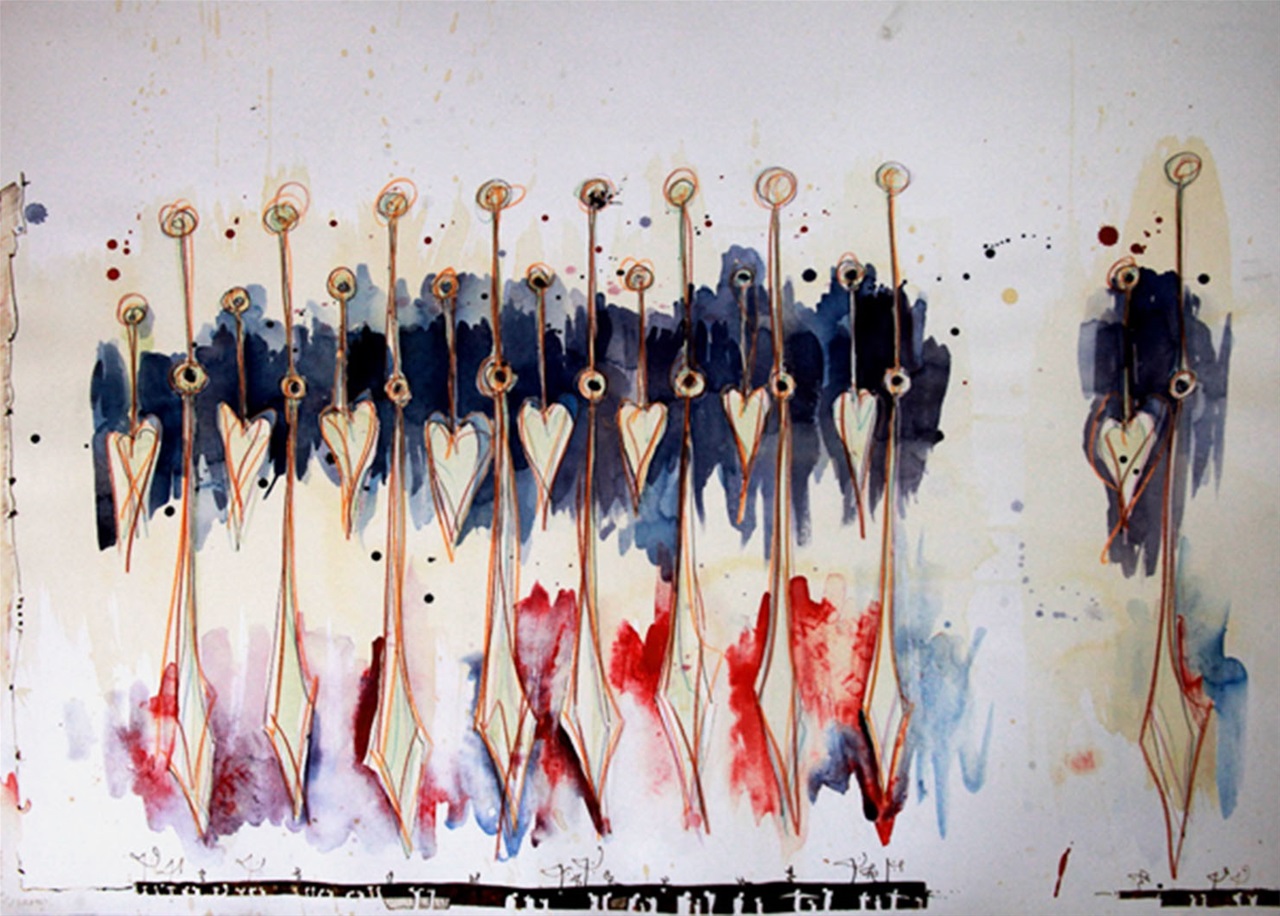 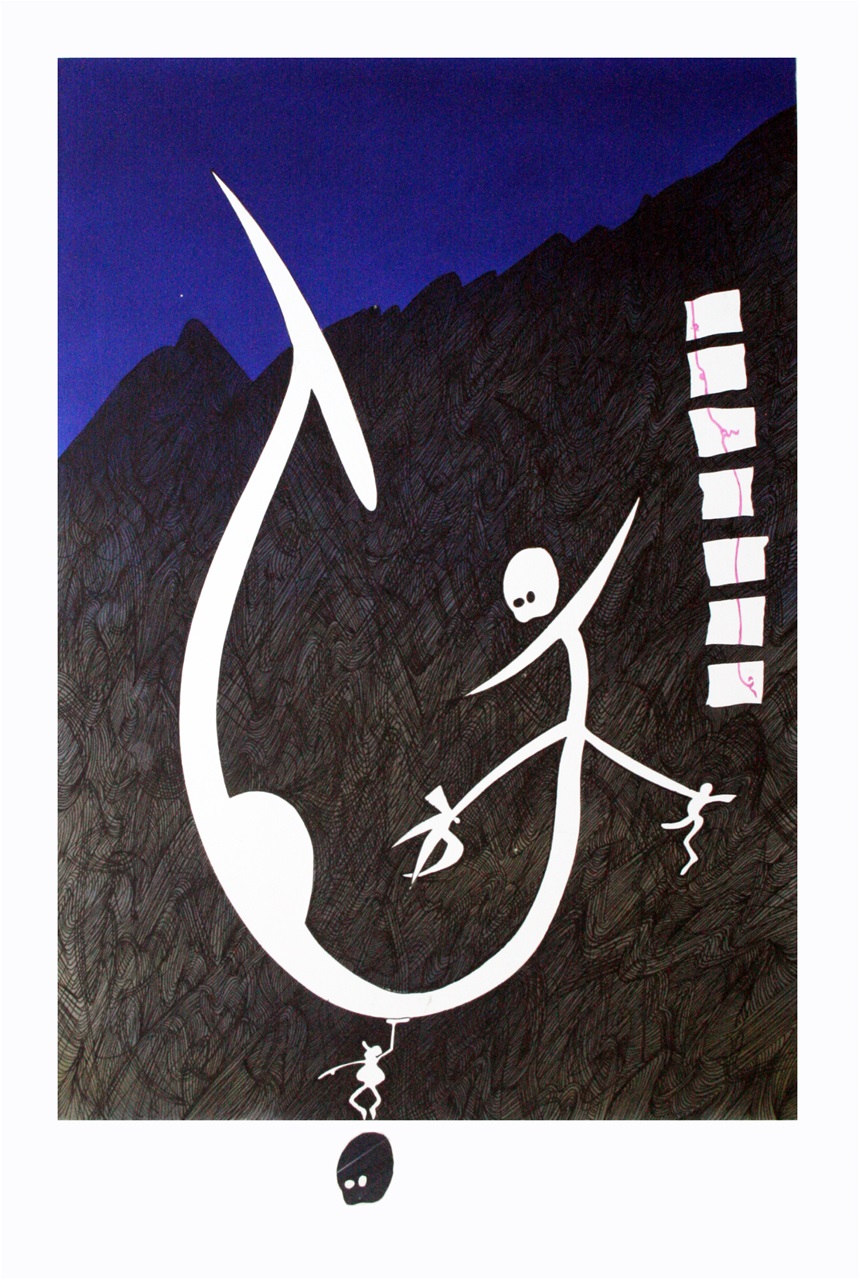