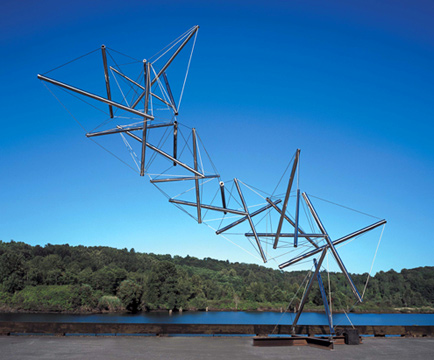 The tensegrity sculpture of Kenneth Snelson

It’s that time of the year. Our thoughts turn to sculpture.

My thoughts had me linking one special kind of sculpture, to the state of the world. I reckon it’s a strong metaphor. See if you can follow my drift.

Imagine you’re holding up a piece of rope with a seat hanging from it. Now imagine sitting in that seat. Nah – it’s not gonna work. But don’t you wish it would?

Call me crazy, ‘cos I live with the hopeful belief that such things are possible. It’s an enduring fantasy of mine, to float on a stage of my own levitation. Of my own creation. Of my own support. Of my own construction. Or at least of my own ‘faluting imagination. It’s kinda like a quarter-pie type of physics – plausible, impossible, magical, absurd, all at the same time. The logic should work: you hold it up, so then it can hold you up.

So much for instinct. (Perhaps that’s why I’m not a millionaire – but’s that’s another story altogether).

Trouble is, in this real world of harsh reality, these things can’t happen. You can’t hold up your own hammock. It seems physics cares not for ridiculous reciprocity. There’s no free lunch where gravity lurks.

Well maybe we can trick it (gravity) – or at least physical things (likes sticks and string). And in doing so delight ourselves with sculpture and symbolism.

It’s called tensegrity sculpture, and I can’t think of a more useful metaphor for our collective situation in heading into this uncertain year. We’re will simply have to hold ourselves up, by whatever magical means possible. Bring on the wizards! We need ‘em. Or we may have to become them ourselves.

Here’s the curious thing: although entirely possible, and quite simple really to get sorted, tensegrity has no deep and essential foundation story in our discovery of the physical world. After all the eons of human inventiveness – we had already come up with radio waves, photography, flight, you name it – when some artist figured out tensegrity. Around the 1960’s in fact.

It reminds me of that bumper sticker that posits the cheeky query, “What if the hippies were right?” It seems in this case, they were. Well, maybe it was the zeitgeist that did it, for there are a few claimants to the ‘invention’ of tensegrity sculpture.

Whatever – I still think we can use the symbolism now. We’re floating precariously; we’re held in screaming tension. There’s so much that just doesn’t stack up in the world at the moment. Here’s hoping we don’t all fall through the cracks of our own making. Maybe we won’t.

To the facts: “Tensegrity,” we’re told by definition, “is a structural principle based on the use of isolated components in compression inside a net of continuous tension, in such a way that the compressed members (bars or struts) do not touch each other and the pre-stressed tensioned members (ropes, cables or tendons) delineate the system spatially.”

Another definition reads better in Dutch: "De touwtjes houden het hele bouwsel bijeen en de houtjes uit elkaar." Which translates to, "A set of strings that keep the construction together and the sticks apart." (From an article by Chris Heunen and Dick van Leijenhorstand.)

The great flawed genius Buckminster Fuller coined the term tensegrity. But that was when he appropriated a student’s artwork, and even exhibited it himself under his (Fuller’s) name. It takes a lot to be a celeb.

Before that, the very simple 3-strut tensegrity prism was first created either by Lithuanian artist Karl Loganson around 1920, or by Ted Pope, another Buckminster Fuller student in the 1950s. But both Karl and Ted did not do much more to develop the idea.

The pivotal student was Kenneth Snelson. He used the term ‘floating compression,” and has since been more closely associated with the vision and its manifestation. Almost all public tensegrity sculptures, and they are around the world, are by Snelson.

Here’s the sad (and topical) thing: Snelson died just recently’ aged 89, of prostate cancer on the longest/shortest day of the year, 22 December 2016.

An interesting element to Snelson’s career is this: he “emphatically rejected” (says the New York Times in his obituary) the description of himself as a ‘quasi-scientist.’ He said: “My sculptures serve only to stand up by themselves, and to reveal a particular form such as a tower or a cantilever or a geometrical order probably never seen before; all of this because of a desire to unveil, in whatever ways I can, the wondrous essence of elementary structure.”

So the analogy continues: without Snelson, we’re on our own now. But the wonderfulness of elementary structure persists. As does good art. Let’s keep it (ourselves) together.

* Afterword: by the way, Snelson was a generous man: you can have a book about him for free. Just download Art & Ideas from the web.