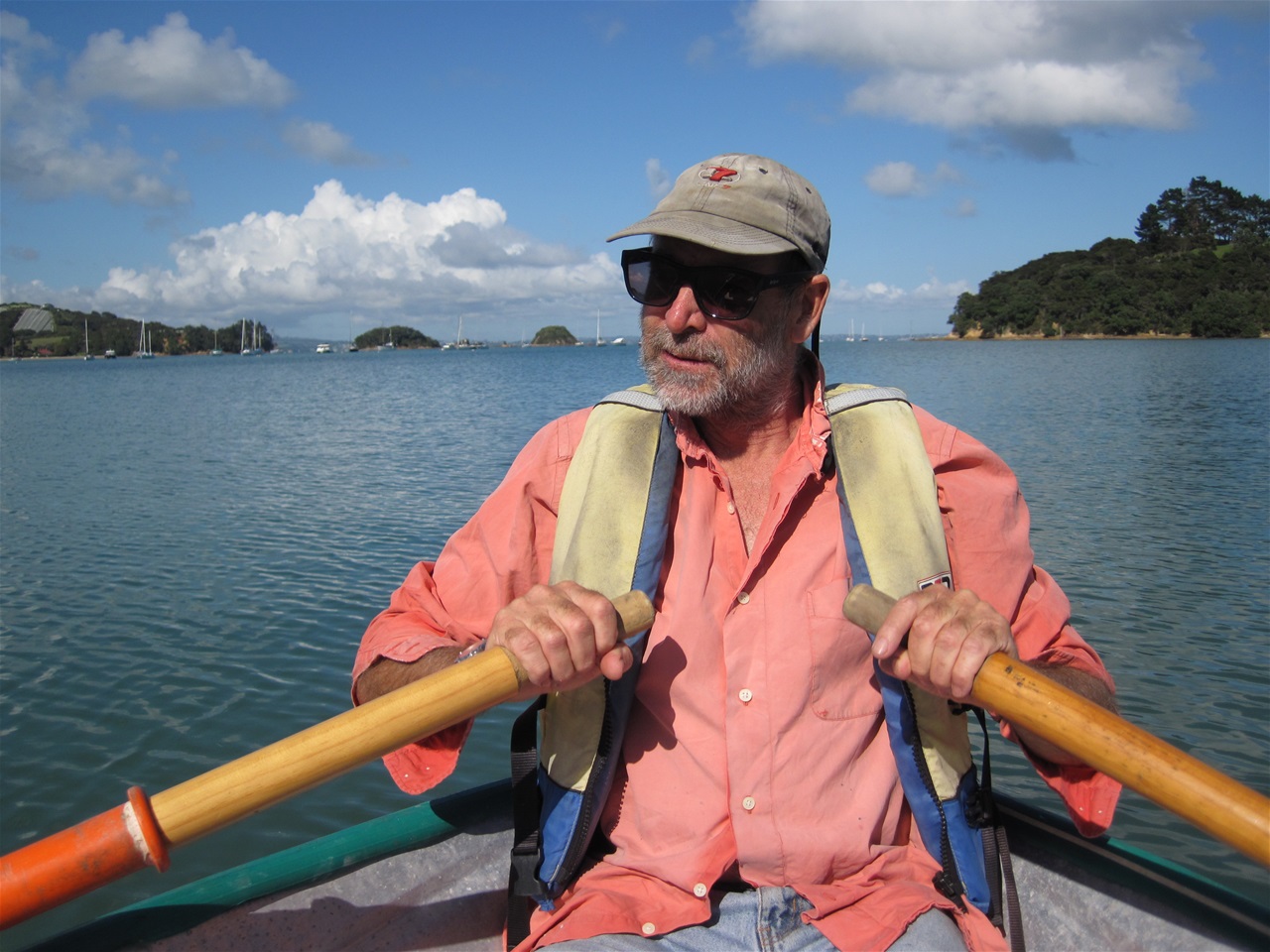 Higher, faster, stronger. Well, sort of, and in moderation too.

If Waiheke had an Olympics, what would it be like? My beloved and I mused idly, this being the season of the five rings and all, as we languidly rowed home the other day. The oarsman (me, always me, I love rowing, so shamelessly hog the blades) took a pause in his work, while we considered this option. This being thirsty work, we partook of a nice cup of tea, as we drifted with the tide and the gentle breeze - thankfully closer to our destination under a cute little pōhutukawa on the crunchy shore of Shelley Beach.

And so, as I bent ever-so-moderately over the oars again, we decided there would definitely be a rowing event in the Waiheke Olympics. Only it would entail special rules, of an appropriately modified, laid-back kind. It's the Waiheke Olympics, you see, and character must be maintained. The rowing: we'd call it the Greybeard and Coxswain Ten-foot Tinnie Trickle. The course would be a 100 metres or so - not the punishing, and to my mind quite irrational, possibly downright masochistic, 2,000 m course being attempted in the try-hard Olympics over there. I mean, if you are going to row somewhere, it is just plain and simple common sense to take off from somewhere close to where you intend going. Not two kilometres away. Get real.

So, in the Waiheke Olympics rowing, the boats would take off with decorum and dignity. No splashing, grunting, or eye-popping and unseemly straining on the oars. Sweating and swearing would be frowned upon. Each boat would have a passenger, and in a special addendum to the rules, this person must be the rower's significant other. This person must also be equipped with a flask of tea. The rules of the 'race' stipulate that at some point along the route, the rowers must pause long enough to enjoy a cuppa with their lifelong steering hand. I imagine it being quite convivial, with the boats sitting softly on the sleepy late-afternoon water, and philosophical comments passing in friendly manner between the 'competitors.'

There would be no medals at the finish. Perhaps just a shared barbeque. Including a drop of the island's finest. And some good philosophical conversation.

What else would we have at the Waiheke Olympics? I imagine other events would look a lot like the card at the Onetangi Beach Races Day. Only, in the waiter's race, maybe we'd give the prize to the slowest. The wheelbarrows should contain loads of home-made compost. The riders should sit backwards on their horses, who will be asked to go no faster than a Sunday stroll. The synchronised swimming venue will be little Palm Beach, with all competitors appropriately attired. The Sealegs all start with a cup of sugar in their tanks. This in the interests of avoiding noise pollution. And not to disturb those earnest competitors in the siesta grand finals.

How would we do track and field? For a start, we'd get dogs to do the running for us. They seem to like doing it anyway. High jumping would be reaching up for that highest feijoa or plum on the bush. For shots put, we could use the fabled huge Waiheke grapefruit. For discus, we'd use frisbees on the beach. There'd be an artistic component to long jump, with entrants first having to create a beautiful sand sculpture to jump into. Diving? From the wharf, judged by an unhurried wharfinger. Points for the biggest splash.

We thought we had something here. But then the shoreline gently met the bow of our humble wee boat, nudged us to a standstill; and our moment of reverie was over. The Waiheke Olympics. Sounded like a fine idea at the time. But in the end we decided that simply living well, living languorously, with no pressure of having to do whatever higher, faster or stronger than someone else, was the best thing, the apposite thing, for our well-loved little island. We should be champions at relaxing - and no one seeks medals or glory or world-wide TV coverage for that kind of thing. The unique Waiheke Olympics will have to stay just in our minds. Better there.