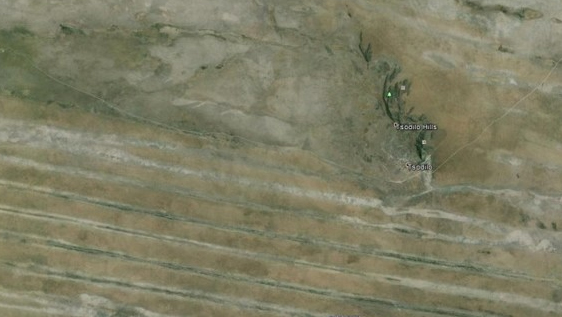 Lines in the desert

The Tsolido Hills in a remote corner of north-western Botswana contain a remarkable gallery of rock art. The location was Botswana’s only Unesco World Heritage site – until the inland delta of the Okavango River, which forms the extensive Okavango Swamps to the south east of Tsolido, was proclaimed as the world’s 1000th World Heritage Site in 2014.

The Tsolido Hills are a cultural heritage site of great importance. The swamps are an ecosystem of vital significance, as among other things they are the home base of 130,000 elephants, the largest remaining coherent population in the world.

Recent research has shown that while the elephants wander far afield from the swamps, crossing international boundaries into five countries (Namibia, Angola, Botswana, Zambia, Zimbabwe), they invariably time their return to the delta to coincide with the annual flooding of the swamps which takes place June-August, the height of the dry season in the surrounding lands.

Now, because of a remarkable quirk of geology, a whacko hypothesis has emerged. Surrounding the Tsolido Hills are parallel dunes of the Kalahari Desert, which are astonishingly regular in their form. They are all about a mile apart, and maintain this as an almost exact parallel separation, which from the air appears quite unnatural.

There are supposed to be no straight lines in nature, remember? This assertion while conveniently overlooking the most dominant visual straight-edge in any naturalistic view, the horizon. Anyway, like Erich van Däniken’s spacemen theory about the Nazca lines in Peru, the weirdo fringe is propounding a story that these parallel Kalahari dunes are, in fact, the remnants of an ancient civilisation’s irrigation scheme, “The largest wide-array man-made (or at least non natural) structure in the world.”

Quoth the author of the piece on the Earths Epochs website, one John Jehsen Jr, “The entire complex covers an area about equal in size to the State of Arizona in the USA. The canals are an integrated system of apparent irrigation and agricultural (and probably aquaculture) design. The system is about 350 miles in width and about 300 miles in depth. (For the remnants still visible.) This system represents roughly 67 MILLION acres of sustainable agriculture. Given the sophistication of design, it is entirely plausible to assume an above average yield, i.e. feeding well over 90 persons per acre on an annual basis. The system may or may not have provided a sustainable aquaculture (marine farming) environment. I have no reason to suspect that it did not.”

He goes on to claim that “this system was in fact providing food for an average of about 5 Billion people” !!! The screamers are mine.

In this, the theorist references an entirely believable changing landscape in Africa over eons, sometimes accelerated by human impact, and posits a correlation of the Kalahari’s now dry state, with the fact that the Sahara itself, was once a well-watered savannah (witness the swimmers’ cave rock paintings made famous by the novel and the film The English Patient.)

Our madman also accounts for variance in ground level over the extended area of his irrigation canal complex, by asserting the water in the ‘canals’ would have been deep enough to accommodate that.

He doesn’t explain how the sand of the Kalahari would hold the water in the ‘canals’. In fact, that’s precisely the reason why the waters of the Okavango simply subside into the earth, why the delta is landlocked, why the river never reaches the sea.

Beyond that, supporting hard evidence is scant, or more precisely, non-existent. In the same manner that the cryptozoology belief in the existence of the huge, frightening Australian primate, the Yowie, founders in scientific circles because no bones, fossils or other physical evidence have ever been found (though some giant turds were once presented as ‘proof’), so the ancient irrigation megalopolis of the Kalahari presents no artefacts that would accompany such a huge human presence, and be there as historical markers. No middens. No ruins of cities. No burial grounds of great numbers of humans. Even the paintings on the rock faces of the Tsolido hills bear no reference to the widespread agriculture (and aquaculture) as claimed in the theory. It would seem the vast complex of the Kalahari irrigation scheme would be the first in history to have no humans to tend it, or no great population to feed.

What does science say? Given that this is a remote area, and of no real interest for prospecting, mining or contemporary large-scale agriculture, not much. But there is this paper by PA Jacobberger and DM Hooper of the Smithsonian Institution, Geomorphology and reflectance patterns of vegetation-covered dunes at the Tsodilo Hills, north-west Botswana. What does it say? "Within northwestern Botswana, the Kalahari is dominated by vast tracts of old linear sand dunes, now degraded in form and stabilized by vegetation. These dunes, though now fixed in place, were once mobile and formed under presumably more arid conditions than exist today. And, The dunes south of Tsodilo are strikingly linear and parallel; although their morphology is heavily degraded, dune forms are visible on Landsat data, apparently due to differences in stabilizing vegetation between dune crests and interdune corridors. The dunes trend roughly east-west (azimuth 102"), average 2 km in crest-to-crest wavelength, and attain a maximum height of 25 m. Individual dunes are several tens of kilometres long, so that they run uninterrupted east-west through the field site.

"Because of their subdued topography, the dunes do not cast shadows visible in satellite imagery, even at low sun angles. In the field, traverses were taken across dunes, and slopes of 2" to 4" were measured on the broad dune crests and flanks, with locally steeper slopes; for comparison, the angle of repose for quartz sand in active dunes is 34". Grove (1969) also mentioned these extremely low slopes, and Interdune corridors are typically narrow, flat, and grass-covered with a few percentage of trees and scrub.

"The corridors are sand-filled, which explains the lack of lag surfaces. Interdune corridor width varies from 0.4 km to 1.0 km. Dense tree thickets occur locally within some corridors. No active fluvial channels were identified in interdune corridors within the study site, but a few small pans were found." (So, no water there.)

"A few ephemeral or abandoned stream channels cut diagonally (my emphasis) across dune fields and others follow interdune corridors. In the field, these fluvial features are not obvious. Since no surface water was observed in these channels in any of our TM images, and because of their subdued field morphology, it is likely that Geomorphology and reflectance of vegetated dunes these are abandoned streams rather than active ephemerals. No active fluvial channels were identified in interdune corridors within the study site, but a few small pans were found."

In their conclusion, the scientists re-iterate the importance of in-the-field observations, when studying a phenomenon like the parallel dunes.

It hardly bears reporting that the ancient civilisation theorist, John Jehsen Jr, has never been there. All the better to formulate weirdo theories. And so it goes...