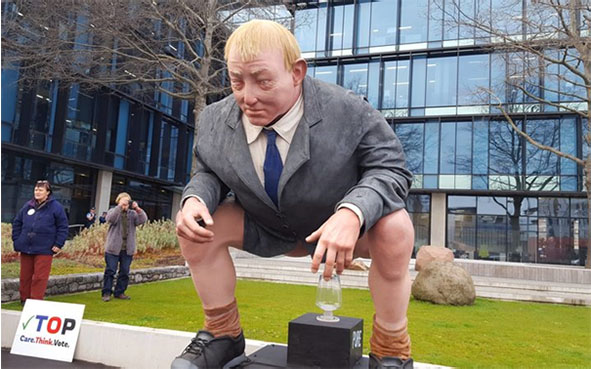 How much bite could or should art have? It’s an enduring question apropos protest art in its many forms. Satire is an enduring institution, but only in places where the basic rules of the game are accepted – namely, that robust debate can stretch to sorties against individuals in a symbolic way. These digs may contain metaphor, imagery, innuendo, character questioning, but never actual physical assault. Satire survives where allowance is made, where indulgence is possible. You could say it’s a cornerstone of free speech.

The best satire conveys its point in indelible ways. The best satire makes you laugh. The best satire has people laughing, even when they don’t realise they are being lampooned. Often that laughter comes to only a part of the audience. But if that laughter generates an equal measure of outrage, what then? Does anyone have the right to obstruct, remove, destroy or ban such artwork?

These are vexed questions, and they honed into the delivery on Monday morning, 4 September 2017, of a realistic statue of a giant Minister for the Environment in the New Zealand government, Nick Smith, squatting, pants down, taking a dump over a glass. The artwork was delivered to a spot in near the front door of ECan, the local authority responsible for water quality in the Canterbury region. Sculptor Sam Mahon has been a vigorous campaigner against declining fresh water quality (read his book The Water Thieves), and his point here is clear. There’s added symbolism in the fact the media used for the statue includes the excrement of hoofed animals mixed in with the epoxy resin.

It’s true that Mahon tried to contribute to a democratic process within ECan about the water quality debate. He believes the summary removal of the elected ECan council by Nick Smith in 2010 robbed the campaigners of that democratic avenue. On Monday, as the statue was being delivered, he said, “We used due process. Now we have used our art as our voice.”

Ironically the two-times life size scale of the Nick Smith statue was inspired by a display of First World War soldiers at Te Papa, that was designed by Peter Jackson and built by Weta Workshops. Sam says he was blown away by their heroic impact. Sam says, quite reasonably, that the maquette of the squatter would not have the same impact as the 4m high full-size version.

As for the dig at Nick Smith, Sam believes he is on acceptable satirical ground. He recalls a face-to-face conversation he had with Nick Smith where the Minister said “Sam there is absolutely nothing that you could do that would hurt my feelings.”

Sam returns the compliment of straight talking. Of the squatting form he says, "It's the simplest image I can think of to describe the catastrophe of water and the government's abdication from its duty of care."

On Radio New Zealand on Monday morning, Smith said of the sculpture: “I think there are smarter ways in which people can express themselves.”

He was asked, “Are you offended?”

“Not really,” he said, “But it’s a bit crass.” So, in effect an acceptance from Smith of the nature of satirical art.

What was not acceptable was when, on the weekend before at Nelson’s Saturday morning market, a pair of protestors allegedly tried to smear rat poison on his body, and made threats against his family. The difference is clear to see; and where the lines must be drawn.

This is written on Monday morning, as the squatting statue is being delivered. It may not still be there today. There are injunctions afoot, and probably local Christchurch bylaws against the uninvited dumping of artwork in public spaces, that may see to its removal.

The Year of the Horse was a book Sam wrote about his experience of making a life size bronze mounted horseman, the first ever done in New Zealand. The Southern Man was commissioned by Speight Breweries, and now stands in the carpark at Dunedin Airport. After the epic challenges the sculpture presented, Sam wrote in the closing passages of the book how he overheard a conversation in the airport coffee shop. Someone asked a person behind the counter what she thought of the artwork. Her response: “It’s alright, I suppose” or lukewarm words to that effect.

However the fate of The Squatter is decided, I reckon at least this time Sam will have generated ripples that should endure.