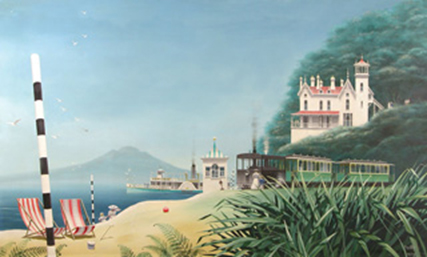 Felix Keely - the art of the OE

This is an extraordinary painting. It’s by Felix Kelly, an artist who is a little out on a limb in our nation’s creative family tree.

Thing is, Felix Kelly like so many aspiring artists of his time left (some say ‘fled’) the parochial shores of New Zealand in 1935 when he was 21 years old, for the limitless attractions of London.

But instead of disinheriting his legacy, Kelly – for the rest of his life – continued to paint an idealised, remembered New Zealand, although he never returned to visit. His career, in a way, preceded and mirrored that of Andy Warhol. He became successful as a commercial graphic designer, hobnobbed with the fancy folk and celebrities of the day, and struggled for acceptance of his homosexuality. He sold many paintings of country houses to a distinctly upper-class clientele. In his own work, he had a predilection for including trains, cars, and boats, all executed in a hard-edged style. Monumental buildings, seemingly abandoned, and strange figures in a surrealist style inhabited his painted world too. In the English context, it has been pointed out that Kelly’s story is remarkably similar to that of the protagonist Charles Ryder in Brideshead Revisited, the famous novel by Evelyn Waugh. The film and TV series of Brideshead Revisited was shot at Castle Howard in Yorkshire. In a case of art and life imitating each other, Kelly knew the Howard family, and spent weekends at the family seat. Weekends, we wonder, reminiscing about his lost childhood.

But what to make of this painting? It’s titled A New Zealand Childhood Remembered. And sure, the ingredients are there – Rangitoto, the grand Auckland villa, the tram, the flax plants, the beach – but somehow, something doesn’t seem quite right. The light? The cleanliness? The bloodlessness? The expectant quietude of nothing happening?

There’s also the vertical exaggeration of the volcano and the two-storied villa – a pictorial device I’ve noticed is common in art that depends on memory. It’s as if an unrealistic sense of the sublime is imposed, when the reality of memory would be more ordinary.

Whatever – it’s an intriguing painting. Mostly because it traverses this rich territory of idealised memory. Of cleanliness versus truth. Of the process of mis-remembering (deliberately?); and of constructing a fantastical parallel alternative.

It’s interesting to compare Kelly’s work with that of those artists who chose to stay at home, to wrest a unique iconography from the reality of New Zealand at that time, its landscape, people, and context. So who are the true artists, Kelly or the rough modernists among his contemporaries, like Toss Wollaston and Colin McCahon?

I often wonder how our memories of Waiheke would be, of this time, a generation hence. For if that vision is based on the surviving glossy imagery of tourism publications, and not balanced by the reality of tougher circumstance (like the unfeeling decision to shut down Seaside Sanctuary rest home, for instance), then we could be following the same mis-remembering that Felix Kelly did.