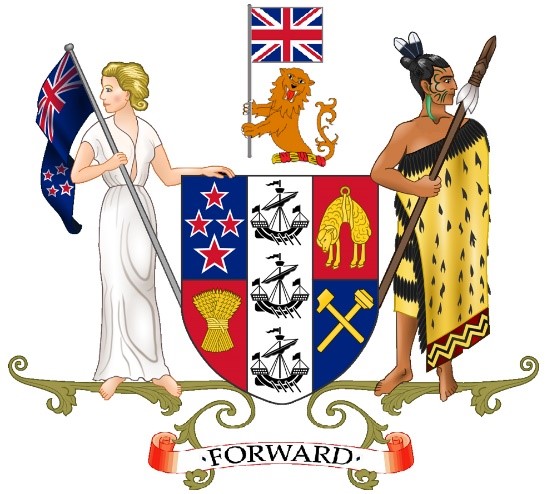 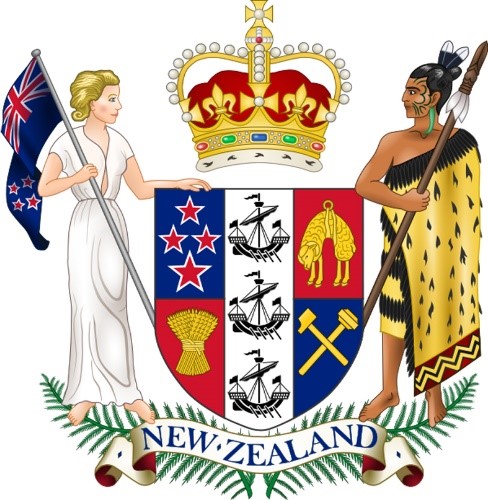 How we've changed. Have we changed? The curious case of the New Zealand coat of arms.

Zealandia and the Māori warrior. They have had an odd conversation over the years, mostly fraught with epic misunderstanding. That historical relationship – and perhaps its current status, too – is reflected in the strange story of the New Zealand coat of arms.

It started in the predictable way. In 1906 New Zealand, the Dominion within a larger Imperial entity (remember that?), was in need of a coat of arms. In the manner of these things, a public competition was duly launched. Something must have happened to postpone this, for the competition was re-launched in 1908, drawing 75 entries. The designs featured the anticipated – kiwis, sheep, cows and moas – but given the tenor of the times, a number also had British soldiers and lions rampant.

And again, given the manners of the era, the top three entries were sent to England for a final decision. We couldn’t do that ourselves, you see.

The winning entry was by James McDonald, who was then working as a draughtsman in the government Department of Tourism and Health Resorts. It was similar to the coat of arms we have today, but with some subtle – and telling – differences. Zealandia, a clone of Britannia, faced us on one side of the shield, and a Māori warrior on the other. They made no eye contact. In fact, they seemed from different worlds. Probably, for the model for Britannia was said to be a Wellington socialite, one Alice Spragg. The Māori warrior, was obviously of the generic noble savage type.

Their lack of communication across the top of the shield is best revealed as a metaphor, in the incomprehensible officialise of heraldry. The coat of arms is arcanely described thus: “Crest: St Edward’s crown (formerly a demi-lion holding a union flag)” So far I can follow. But wait! It gets world-class turgid.

“Escutcheon: Quarterly Azure and Gules on a Pale Argent three Lymphads Sable between the first quarter four Mullets in cross Gules fimbriated Argent, in the second a Fleece, in the third a Garb, and in the fourth two Hammers saltirewise Or.

“Supporters: In dexter Zealandia bearing the flag of New Zealand, and in sinister a Maori Warrior bearing a Taiaha (Fighting Weapon) and wearing a Kaitaka (flax cloak) all proper.”

Get it? No, neither did I. You can always just look at it, to see what they’re describing. Uh, OK. They may as well have been speaking Te Reo, or Greek, for all the sense this written description makes. You couldn’t describe misunderstanding more comprehensively, if you tried.

One positive: This must be one of the very few places where the dress of the woman is not commented on, and that of the man is. But at least, it’s comforting to know, he (and perhaps she as well) is “all proper.” She does have a plunging neckline. Daring, I’d say for 1908. She places a proprietal hand on the top of the shield, as if it’s her mantelpiece. Like a society hostess. He leans an elbow on it, like the confident DIY guy in the Mitre Ten ads. But they’re looking determinedly away from each other. The New Zealand Wars, Raupatu (the land confiscations), Parihaka, the Encircled Lands, they were still in living memory.

Out there in the printed world, things were not all so resolved either. By the 1940s, there were apparently around 20 different versions of the coats of arms being used. Further metaphor of us not quite knowing what’s what about ourselves.

Aha! A committee! That’s what we needed to standardise our competing coats of arms. This was duly done. I wonder what female and Māori representation that committee had, but can’t find out.

Anyway, a list of amendments were sent to the Queen (bless her) which she kindly approved in 1956. The biggest difference was that the supporters of the shield (Zealandia and the Māori Warrior) were redrawn to face each other. The Māori man lost a hei tiki that had been in some versions of the many coats, but retained his greenstone ear pendant. He kept the feathers on the extinct huia in his hair. A scroll at the bottom was replaced with fern leaves. And the vague injunction ‘Forward’ at the bottom was replaced with ‘New Zealand.’

So, OK, now we knew where we were. And I suppose ‘Forward’ can be removed, and it can remain inferred. Only how much ‘Forward’ have we come? To look at current statistics (and their trends) about the socio-economic status of Māori – and other associated elements like take-up of smoking, prison incarceration rates – it’s clear the two supporters of the shield are still not equals. Still not able to see eye to eye as equals, despite their mutual half turns.

The one thing that does seem appropriate now is the sad nature of the sheep (the Fleece in the second quarter). It doesn’t look happy - never did. Is this a vision of the sustainability of elements of our agricultural industries? A visual representation of where 'Ever Onward Without Due Regard For The Environment’ might get us?

Anyway, at least we have one coat of arms now. Well, since 1956. Do we need a PM with a vision to change it as his or her very own legacy? Nah. Don’t think so. Let’s just (try to) attend to all the stuff that surrounds the coat of arms, and especially the two central figures who can’t quite connect.

For a start, what the coat of arms needs now is to symbolise unity, and a sustainable future for all of us.