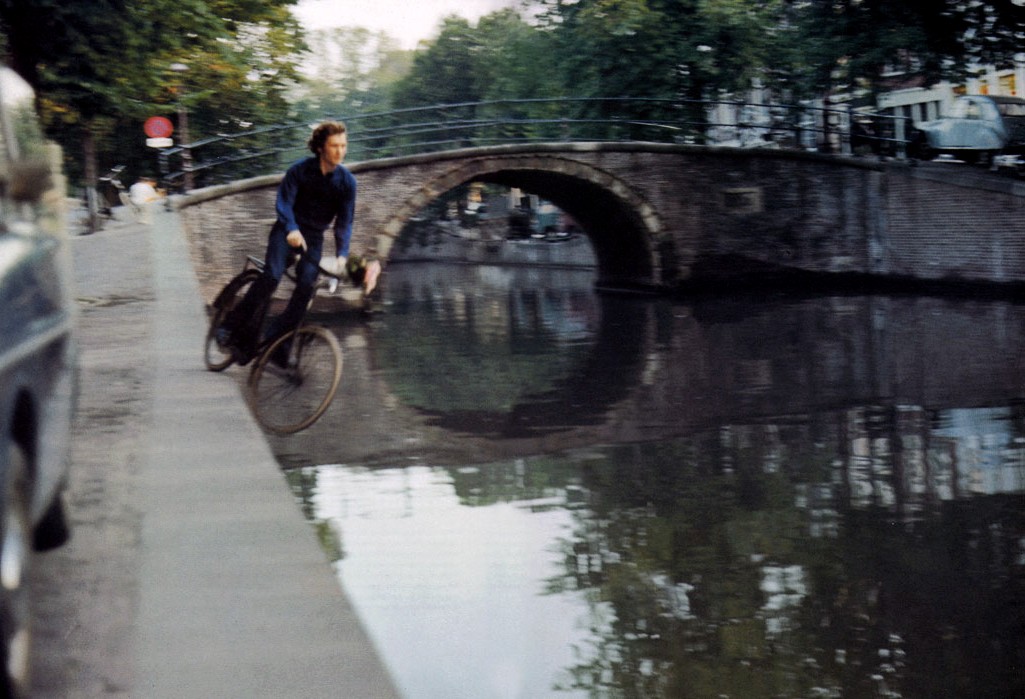 Falling off the radar - the art of Bas Jan Ader

There are plenty of stories of hopeful artists who have not yet made it, doing what they have to do.

Bloke I know, draws well in his own particular style, and a film-maker too – he’s now driving a garbage truck. I say that would give him plenty of good material. He to despondent to take up my suggestion.

One such half-forgotten character was Bas Jan Ader, an American conceptual artist of Dutch birth, whose mysterious disappearance perhaps has led to a greater recognition of himself than he would have if he had simply kept trying, below the breakthrough line.

The work for which Bas Jan is now known for is the artistic investigation of gravity; and his use of gravity as his actual medium. His individual works took the form of mini, truncated events. So he would film himself edging out along the overhanging branch of a tree until it snapped (or his grip gave out), and he plunged into the river below. Or he would balance a chair across the top of a steeply pitched roof, sit there while edging bit by bit to one side, and eventually tumbling down. Or he would ride his bicycle off the edge of the wharf into the canal. He might stand by the side of the road, leaning ever further to one side, to the point where he fell down.

I’m not sure if he ever injured himself in these performances – he often had the soft landing of water beneath him. But the fall from the roof of the house was real, and onto the unyielding earth.

With a friend, he produced a satirical art magazine called Landslide, which would feature interviews with imaginary artists, and suggest artistic shams such as ‘expanding sculpture’ (seeds in an envelope). While the magazine spoofed conceptual art, it has become to be seen as a conceptual art exercise in itself.

There’s no money in conceptual art (or at least it is notoriously difficult to monetise), so Bas Jan supported himself in California by teaching at art school.

He also did works that explored sorrow. A work entitled I’m Too Sad To Tell You has him crying on video. Perhaps the fact that his father was murdered by the Nazis in the Netherlands during the Second World War has something to do with that.

Bas Jan’s great work was to be a triptych, In Search of the Miraculous. The first part is a film of him wandering the streets of Los Angeles at night, shining a torch into darkened alleyways. The middle part of the triptych was to be a sailboat journey across the Atlantic, west to east in the smallest possible boat, linking his two worlds. And the last part was to be another night-time, torchlight perambulation of Groningen in the Netherlands.

It was to be his final work.

He never made it. The boat was found, abandoned and only half afloat by Spanish fishermen, 100 nautical miles southwest of Ireland. It appeared he had been washed overboard, as an anchor for his lifeline had been ripped out.

Small sailboats had crossed the Atlantic before, and Bas Jan was an experienced sailor, having crossed oceans before. But his mother had had a premonition of his death.

In a documentary film of Bas Jan’s life by Dutch film-maker Rene Daalder, an old sea dog was found who said he understood Bas Jan’s imperative for the sailboat trip. He was going to find the place where he could let go, like losing sight of the land, Just like the letting go in his gravity works.

Some say the sailboat trip was foolhardy, and in itself a vain attempt to approach the miraculous. He needed luck to complete it. As surely as gravity, his luck ran out.

One way for a little-known artist to be remembered, is to be martyred for his cause. Perhaps that’s what Bas Jan Ader was indirectly aiming at. But now he is remembered for making it halfway through a perhaps foolishly ambitious conceptual art triptych.

We gather fame in mysterious ways, artists included, and Bas Jan Ader’s story is a case in point.