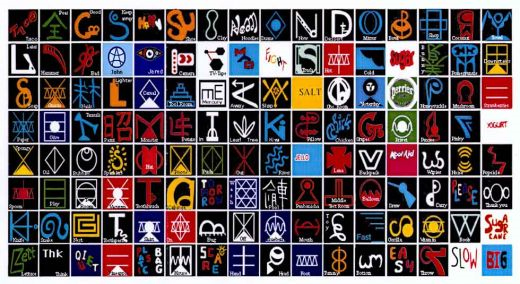 It’s a curious fact that while people multiply, languages are dying out.

There are still around 7,000 languages in existence, but half of them are not being taught to children. There are about 600 languages that have fewer than a hundred people who are fluent in them. We are tending to uses the major languages more and more – over 80% of the world population communicates in one of 83 languages – a small proportion of the total.

So, while languages are dying out wholesale, a few, a very few in comparison, are being invented.

One of my favourites in this positive side of the unbalanced ledger is Yerkish, a computer language understood by chimpanzees, bonobos, gorillas and orang-utans – and of course invented by a human, the splendidly-named Ernst von Glasersfeld, way back in 1971.

But even now, not many people – or apes, for that matter – do ‘speak’ Yerkish. Yerkish is a lexigram-based ‘language’ used in communications studies with the great apes.

Keyboards are made with symbols, each representing a word, a person, or an idea, and these keyboards form the basis of ‘communication’ with human researchers. Some apes have shown they can understand and respond to hundreds of the symbols. And yes, if you look closely at Kanzi’s keyboard, you’ll see some of the ‘symbols’ are actually words.

This is a fraught area in academic linguistic circles, with luminaries like Steven Pinker and Noam Chomsky scoffing the idea that Yerkish is a real language, and the animals are actually using that language as we would. (Perhaps Chomsky was irritated at what might be implied, when one researcher named his chimp Nim Chimpsky – who turned out to be not so good at ‘speaking’ Yerkish anyway.)

The first ape to communicate in Yerkish was Lana, with her training starting in 1973. In time, she showed that chimps using Yerkish are capable of humour and/or pathos (take your pick).

One night, Lana was alone except for the computer keyboard. She signalled “Please machine, tickle Lana.” Lana could also dial up entertainment with her keyboard. Researchers discovered she preferred jazz to rock music, and movies about chimps (natch) over those featuring too many humans.

Kanzi, a bonobo in the care of researcher Sue Savage Rumbaugh at Georgia State University in the USA, turned out to be a Yerkish star. He taught himself, by watching his mum do her homework. In the end, he could recognise and use 384 symbols.

But still, other sniffy academics said this is not talking. They keep invoking complicated concepts in cries like “Where’s the syntax?” or “Show me the semantics!” to prove the animals are not talking properly.

So where to, for Lana, Kanzi, and all the other ‘speakers’ of Yerkish? Maybe, if we all just keep trying, we will get through – even if our syntax and semantics ain’t perfick.

As one commentator, Alex Dawes said, in ending his essay entitled Machiavellian Monkeys & Shakespearean Apes: The Question of Primate Language, published on the Smithsonian Zoo’s website: “Hopefully, humans will learn to show the animal world what it has clearly shown us: thoughtfulness.”