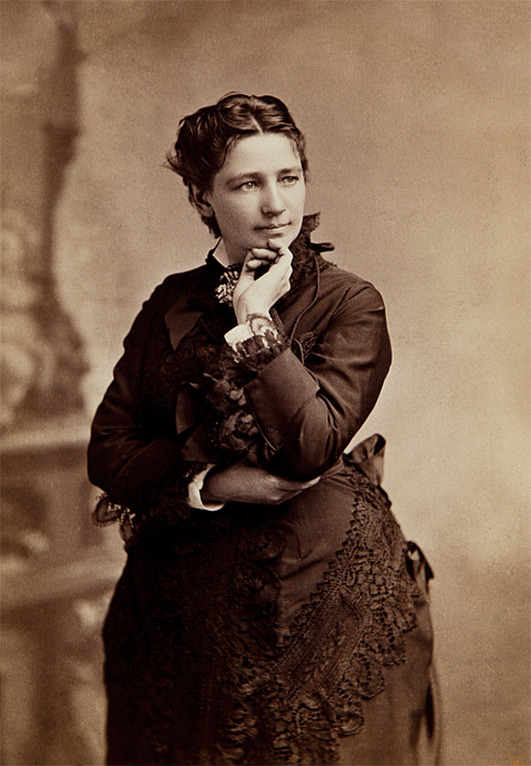 Among the two dozen hopefuls now vying for the Democratic nomination to run for the US presidency, I doubt if there are any as iconoclastic or as forward-thinking as Victoria Woodhull.

She ran for president way back in 1872. That she was the first woman to pitch for the role is in no doubt – she was that far ahead of her time.

Women couldn’t even vote in the USA in those days. But Victoria argued irrefutably that the constitution had guaranteed rights to “all citizens.” Of course. In fact it was only the 19th amendment to the US Constitution, enacted at last in 1920, that afforded the vote to women.

Anyway, Victoria Woodhill was an unusual case. She certainly did not allow any of society’s existing impediments to women to stand in her way. She was born in 1838 to almost-fictional circumstance in the small frontier town of Homer, Ohio: Victoria Claflin was the seventh of ten children, her mother Roxy illiterate and illegitimate, her father Rueben ‘Old Buck’ a con man and genuine snake oil salesman.

Her early childhood was tough in the extreme. Her parents hardly fed her, and her father abused her. By age eleven, she had only three years of schooling. Her father was run out of town for burning down his own mill in a fraudulent attempt to gain the insurance money.

When Victoria was just 14, she met Canning Woodhull, a bush doctor who treated her. (In those days, Ohio asked for no qualifications for someone to pose and practise as a doctor.) Some say Woodhull abducted her. In any event, they were married a few months after Victoria’s 15th birthday.

She soon found Woodhull to be an alcoholic and a womaniser. She had to often fend for her own, while looking after two children, Byron and a daughter, Zulu (later called Zula). Without too much ado, Victoria divorced Canning, and professed herself to be a proponent of ‘free love ‘ – that is, believing women could choose to love who they would, rather than being tied to horrible marriages. She reckoned she had the right to change her mind.

She began campaigning vigorously for women’s rights. She was also a spiritualist medium. Later she also spent some time debunking and exposing those she considered fake spiritualists.

In about 1866, she married again, to Colonel James Harvey Blood, a Union Civil War veteran. He was the city auditor for St Louis, Missouri.

Not shy to try something new, in 1870, she and her sister Tennessee (Tennie) then became the first female stock brokers on Wall Street in New York. They gained a headline in the New York Sun newspaper – ‘Petticoats Among the Bovine and Ursine Animals.’ (Bulls and bears, geddit?) She and Tennie made their fortunes here, developing a portfolio of big-time clients, including the millionaire Cornelius Vanderbilt, who admired Victoria’s skill as a medium, and seduced Tennie.

The sisters used their money to found a newspaper, called the Woodhull and Claflin’s Weekly, which grew to a circulation of 20,000. The paper was primarily used to promote Victoria’s run for the presidency, but also courted controversy by publishing the first English version of Karl Marx’s Communist Manifesto, and articles on free love, sex education, women’s suffrage, spiritualism, short skirts (yikes!), vegetarianism, and licensed prostitution.

The newspaper had a national exclusive in outing a famous churchman, Henry Ward Beecher, for adultery. A heady mix.

Which brings us to her campaign to be president of the USA. Nobody really took her seriously, mostly because she was younger than the stipulated age of 35 (still valid) to be eligible to run. As part of her campaign to promote suffrage, Woodhull testified before the House Judiciary Committee, arguing that women already had the right to vote — all they had to do was use it — as the 14th and 15th Amendments to the Constitution already guaranteed the protection of that right for “all citizens”, not just men.

For her campaign, Victoria nominated (without letting him know) as her running mate, Frederick Douglass, an extra-ordinary character himself. Douglass was a black man and ex-slave who had escaped the South, and though strength of character and the power of his oratory became a famous figure in Washington, and later an advisor to President Ulysses Grant.

Victoria ran under the banner of the Equal Rights Party. Just before the election, Victoria and Tennie were arrested and imprisoned for allegedly running an obscene newspaper. In the election, as expected by many, she received no electoral college votes. In the whole country, only one man admitted to voting for her.

In 1877, after the death of Cornelius Vanderbilt, the sisters were paid by William Vanderbilt (fearing they knew too much about the financial affairs of his estate), to leave the USA and emigrate to England. They took the money and left.

In England, Victoria married a banker, John Martin, gave high-profile lectures on subjects such as ‘The Human Body, the Temple of God’, and started the magazine The Humanitarian which she ran with her daughter Zula.

Victoria Woodhull’s remarkable life shows that there should be no limits to life’s experiences. And that the mores of society should never set such limits.

But sometimes, society take a seriously long time to catch up with the front-runners of radical thinking. And in the meantime, The USA still waits for its first female president.