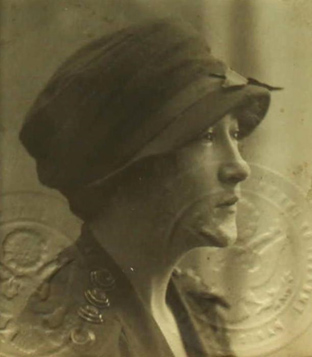 “I do not know why I have such a fancy for this little café,” Monica says, settling her ample, gorgeous bottom on the tiny French wrought-iron chair, which creaks with an atrocious accent. And she is immediately distracted. As is her wont.

“I wanted to share this picture with you. And its story. For it is my confession too.”

She hands it over, furtively. For the first time, I see her embarrassed.

She reads my thoughts. Again. As she’s shown an uncanny ability to do so before: “Because we must know the worst of each other, before we fall further.”

“In love?” M says and my un-ravelling, and our ravelling continues.

The photo. Of a cloche-hatted woman – looking resolutely sideways. A Flapper. The photo marked by embossing. A passport photo. If so, why wasn’t she looking at the camera?

A white Camelia pinned to her collar.

“I’ll tell you why,” M continues, gaining her usual confidence again. “Because of our…of our secret shame -

“No,” M interrupts, “No – my family’s shame. And I must tell you now, so you know everything. About me. Know the worst. Before we go any further.”

I shrug, trying to look non-committal. But in fact I am burning - with desire and curiosity in equal measure. M has this effect on me.

She pauses. Sips her herbal tea.

“This is Jane Anderson,” She says. “My grandmother.”

I arch my brows, wordlessly.

So? Nothing unusual as yet. Go on.

But knowing M, the unusual is inevitable.

When Wallace suggested we join Will and Monica on a convoy campervan holiday, I was at first sceptical. The idea of groups of happy campers together has always scared me.

But when the others dropped out, and it was only the two couples, I softened. I had always like Monica; and Wallace, I suppose.

Besides, what else were we to do with our early retirement? We’d both had decent payouts from our university positions. It was a Covid Thing. We took the opportunity. We were both fed up anyway.

Besides, there was a pleasing symmetry - or so I thought - about the arrangement. Two compatible, companion-like couples. Two comfortable campervans (or RVs as the men called them.) The outback and its wildflowers beckoning.

I recall with amusement my resignation note. A haiku. I’ve dabbled with poetry, aside from my academic speciality of statistical probability.

Horizon beckons.
Who am I
If not
To follow?

When I showed it to her, Monica beamed. And hugged me, a bit too long and lustily. She is a bona fide poet. So the endorsement mattered.

That was then; seventeen months ago. Now, we’ve gotten an exact 37 percent of the way through our circumnavigation of Oz, on our retirement yellow brick road. That’s Wallace’s maddening precision coming though. It’s an academic (never practised) engineer thing. I had begun to resent it.

Still, the trip had progressed well. Will had proved himself to be a surprisingly capable forager: he would scan each coastline at every bay we stopped at; decide on a likely spot, and dive with snorkel gear and a simple Pacific spearing lance. Wallace would join him, and sit on the rocks while Will dived.

Then they would both return with food from the sea - kai moana Will and I would call it, reflecting our Kiwi roots, and his Māori ancestry. Our conquering heroes!

In these times, M and I would fuss about the camp, setting up for the night. Then we would sit on those scandalously comfortable, fold-out chairs (clearly not correct in current Pilates posture - who cares?) and share a cooled bottle of Marlborough pinot gris. Another overlap.

And we would talk. About everything. Even our tired old loves, both out there playing at being hunters. About outwardly successful marriages, inward unfulfilling. Deeply. About wanting more.

M shares a line from one of her poems:

And yet, and but, there’s always more.
Agreed.

About sex, even, something I had been reticent to broach with anyone. Even with my lovely daughters, all three wonderful, open, winning women now.

M and I once joked about tipping the velvet. Coming uncomfortably close (for me at least) to what my daughter Denise and her Juliana must do. It happens, I suppose, it must. But why should I go there? Too much information.

We giggled pinot gris giggles. It was fun - more fun than I’ve had for yonks.

And then I looked at M again, and wondered. Minds race on, as always, into deliciously uncharted territory.

All this while Wallace and Will were out hunting. With their prosperous bellies and all.

We revel in each other. We love all the same things. The birds. The spaces. The flowers. The poetry of it all.

On the remote Oodnadatta Track, at the much-photographed poetry box, we post two jointly-written poems, our different handwritings weaving like waiata, prayer songs in the dry air. We remember windswept autumns in Adelaide together:

This wind should be named in a poem somewhere

This wind
that weaves rhythmically
this way and that

with entrails and entails

that moves to a bidding
forgetting

but does it bring rain?
no – possibly – sometimes

and yes
and maybe
again

and brings us an air full of questions unbidden, unanswered, unspoken instead

This wind should be named.

what an old
and insecure earth
cannot second guess

and that is why
we do this

and that is why
there is no punctuation
in this poem

We laugh at our audacious creativity. And at our shared in-jokes with W and W - what they call their one bar heaters. Ugh.

We love it! (Our creativity)

The men are tinkering under a bonnet.

The photo in my hands. Its top edge riffles in the hot wind of this Port Douglas streetscape. We are in town for once, to top-up on supplies essential beyond fresh seafood. Mostly gas and diesel. And wine. Boutique beer for the blokes. Greens. And fresh sheets for our tousled bed.

W and W had bonded fast and well over talk about the technical aspects of our campervan engines and their different on-board systems. Our’s a Mercedes, their’s a Winnebago. They share a love of mechanical complexity, which RVs have in spades.

And the vast outback. Their shared love. Both born on farms, on opposite sides of the world. They also compare prostate notes.

There was one time when they both had to back-track to Townsville in the small ute Will towed behind their RV, to buy a new alternator for it. (Much joking about American reliability vs German.)

And M and I naturally spend the night together in our van. In our double bed.

Now this photo. What does it have to do with our rapidly-developing, sweetly sexual relationship?

“Just the truth, is all,” says M, employing her endearing Americanism.

“This woman,” she began hesitantly. Short snippets. “My grandmother. Jane Anderson. You need to know.

“She was an American journalist.”

“She was indicted in 1943. Treason. The charges were dropped after the war. Lack of evidence.” She looks up, to see if I am still with her.

“She was Joseph Conrad’s lover. Supposedly."

The Heart of Darkness guy?

“Yes. She was the model for his heroine, Doña Rita, in The Arrow of Gold.”

“She covered the Spanish Civil War for the Daily Mail. London. She was embedded in the Falangists.

A silence. The photo trembles.

“She was captured, imprisoned by the Republicans. Held as fascist spy, M. Held. Tortured. Sentenced to death.”

“Released because the US Secretary of State got involved.”

“But how’s this? By way of thanks, she goes to the Reichs-Rundfunk-Gesellschaft.” She spits out the words.

“German state radio. The Nazis. The freakin’ Nazis, M.! She was their voice to USA radios. She called herself ‘The Georgia Peach’. My grandmother.”

For once, I am audible: “What happened to her?”

She gestures hopelessly around her, at the waving palms, the bruised monsoon sky . She tips over her teacup. And mine. I quickly hike the photo so it doesn’t get splashed.

”The DOJ dropped the charges. Lack of evidence, they said. Holy shit! Here she’s praising Hitler in her American accent. For years."

“They said she was not even an effective communicator. Shoot, M. And I say I’m a poet.”

She bows her head. Tears.

She looks up. No focus. Herss is such a faraway look, that I look behind. Are W and W coming?

I reach out to hold her hand. It’s sweating. But it lies passive. A half-cooked mushroom, in a pan gone cold. A breakfast abandoned.

“All this, I confess to you, in incongruous Port Douglas, in the year of our lord 2021.”

She looks hard at me. Shining eyes. An attempt at a smile. A fragility I have never known before.

I try to divert. “Well that’s all OK with me, M. We can’t blame our ancestors.”

She struggles. I continue. Another tack.

“So was Joseph Conrad your grandfather?"

“Yes. I think she had one last fling with Conrad. Maybe. She never said”

And then she goes quiet.

We sit, holding hands across the table, under the bull-nose verandah roof. Big 4x4 utes rumble by. An occasional road train.

The men arrive, with clinking carry bags. They order midday beers. And burgers.

Perhaps it’s M’s red eyes that are unsettling them. She’s taken off her sunnies. Naked.

Will says: “There’s something…

Wallace finishes for him, “Something we must say.”

They are serious. It almost seems silly, in this rabid Top End sunshine, in this breeze, with the clouds massing over the hills inland. The sublime takes no notice.

“We love each other.”

Yer. We’ve been on the road for a while. (Monica)

“No, you don’t understand. We really love each other.”

Monica bursts out laughing at the unexpected cliché. And the incongruous neatness of it all. Suddenly, we’re all laughing. All hands held.

Only I will have to get used to my new Nazi-descended lover.

But there’s the one big thing about Monica’s slimy southern hemisphere lips. They remind me somehow, disgustingly, of mushrooms.