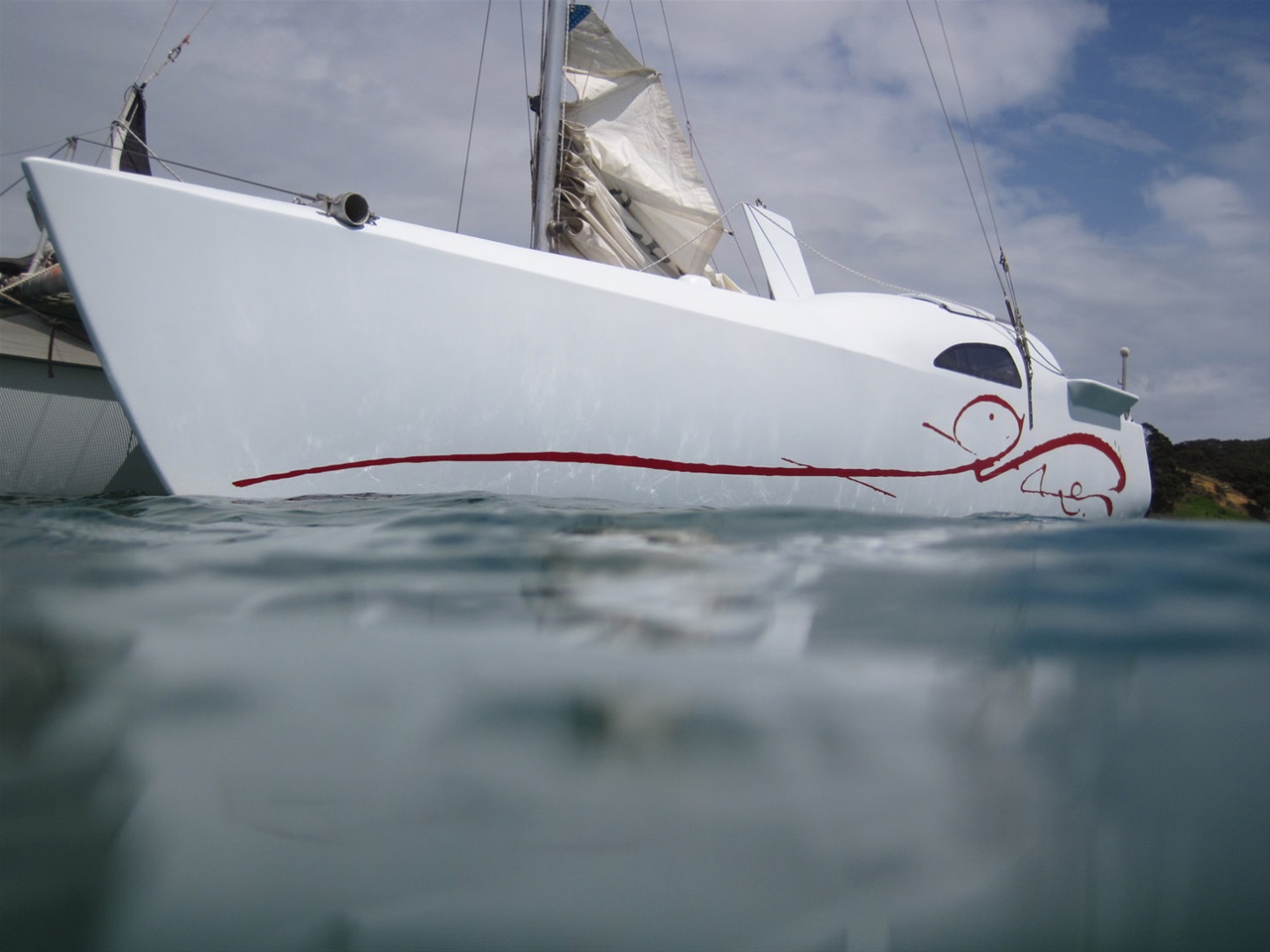 Here's the dolphin's eye-view of our boat. As you and the dolphins can see, we adorned it with an enlarged line, taken from a painting of mine. We hoped to make it a distinctive craft.

The squiggle works in place of a name, just like the singer who once tried the same. The curious thing is that whenever we're visited by dolphins while out sailing, they display what can only be an interest in the art. (I wish they had money, and could buy as well, but that's another story...)

Anyway, instead of the usual coming from behind parallel to the boat’s course, and surfing in between the hulls on the pressure of the combined waves from both bows, since the painting the dolphins streak in from the side, and at the last moment turn on their sides to have a good ol' dekko at the line.

The graphic is in dark red, so it could be they see an alluring and interesting splash of blood - they are top end predators after all. But I, being what I yiz, reckon they like the work. These are dolphins with an advanced art appreciation I say. An artist is always seeking affirmation - even if from other species.

The artistic visual world of the dolphins must be somewhat limited. Blue. Deep blue. Nothing but blue. And more blue. With occasional fish. Which must be eaten. So perhaps they make their own art out of streams of bubbles.

Or one could say they do aerial (and underwater) gymnastics, with the way they frolic. Perhaps they even have competitions, and contestants are scored up to ten, by grumpy oldie sport administrators holding up placards (or blowing the right number of bubbles.)

Perhaps they even have controversies over rigging of scores, favoritism, and what 'artistic interpretation' really means. Just like we do at the Olympics. At least they seem to take synchronised swimming seriously – or at least build it into their daily workout regimes.

But does my anecdotal evidence stack up? Here's a special example. Off Tikitikiatonga Point (near Horuhoru/Gannet Rock) a wee while ago, three dolphins came past and took a look at the line. Swish, flip, splash, pffht! (blow) and again. They were distinctive, being big dad, medium-sized mum, and small baby, sticking close. They hung around for a minute or so, doing the looking at us from the sides thing, and then I imagine the littlie's attention span wavered, and they wandered off.

I invited them back anytime, by calling to them when they last surfaced. I hoped they heard. Sure enough, five minutes later, they returned, bringing about 20 more mates. We recognised the original three among them.

They all did the art appreciation thing again, as if showing their friends an interesting show at the human gallery. And then did a fine jumping display for us, which lasted twenty minutes or so. Was this reciprocation - a kind of art exchange?

What they were doing was certainly not the usual humdrum business of hunting. This was something else, something recreational. And it appeared to involve us. I wish we could have asked what was going on. Maybe the line on the boat was doing the talking.

Some language experts say we'll soon be able to speak dolphin. But in the case of the visual language outlined above, I do believe we already do.